I have written every day for the past 10 years. If you like to read, I've got your back - and I promise to challenge your thinking
Back to articles
October 5, 2018 • Business Building

20 Steps To Be An Overnight Success

She comes in close behind one of her musical idols, Ella Fitzgerald.

And she leaves the incredible Tony Bennett, Frank Sinatra and John Coltrane in her wake!

For a jazz musician that’s an incredible feat.

Her family, her friends, her fellow members of 4PC (our private members club for high performers), and our boys and I are all so proud of Monique.

(In case you don’t know, I married Monique 11 years ago and we have 2 little boys).

If you would prefer, click here to watch a video I made about this.

Monique is not just a Creative, she’s a Creator.

Creatives use their imagination and ideas to make something original in this world.

But Creators use the power of generative language, they act without attachment, they set goals as a place to come from (not as a place to get to), and they do the work (no matter what).

That makes it sound easy. And it ain’t! 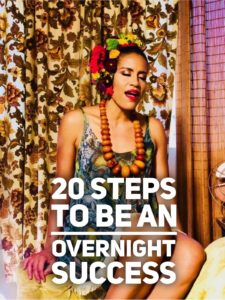 DO YOU WANT TO BE SUCCESSFUL FAST?

In less than a year, Monique has written and performed a one-woman show that has got rave reviews, won an award at The Hollywood Fringe Festival and sold-out at the prestigious New York Solo Theater Festival.

She’s written, performed, recorded and released her third album and it’s gone to the top of the charts in iTunes.

All this in a year.

Ladies and Gentlemen, I Give You…

[The next 4 steps are very important…]

ENOUGH WITH THE ‘7 STEP PLANS’ AND THE ‘SECRET FORMULAS’!

This week alone, in my Facebook feed, I’ve seen an ad that reads:

“Do you want the exact blueprint to how I’ve built my Inc 5000 coaching business? For Free?!”

And another that starts:

“Get the Precise Formula for how I built my $20MM business…”

If it was that simple, save yourself time and buy Richard Branson’s autobiography – because then you, too, can be a billionaire!

The reason you often can’t simply follow someone else’s steps to success is due to a psychological concept called Survivorship bias.

Wikipedia defines it as follows:

“Survivorship bias or survival bias is the logical error of concentrating on the people or things that made it past some selection process and overlooking those that did not, typically because of their lack of visibility.

This can lead to false conclusions in several different ways. It … can lead to overly optimistic beliefs … and the false belief that the successes in a group have some special property, rather than just coincidence.”

Listen, if you really want to be successful, there are a ton of different paths you could take.

And just like them, you’ll face roadblocks, challenges and criticism along your journey.

But here’s the secret… the biggest roadblocks, challenges and criticism you’ll ever face are the ones that are on your inside.

The writer Steven Pressfield calls all this ‘Resistance’:

“Most of us have two lives: the life we live, and the unlived life within us. Between the two stands Resistance.”

And while I celebrate Monique today, I’ve witnessed her on her journey.

It’s been challenging. It’s been filled with ups and downs.

But, as Steven Pressfield writes in his book, The War Of Art:

“The professional has learned that success, like happiness, comes as a by-product of work.

The professional concentrates on the work and allows rewards to come or not come, whatever they like.”

AFTER THE ECSTASY THE LAUNDRY

The day after hitting #2 on iTunes, Monique heard that her application for Grammy membership hadn’t met their requirements, so she had to resubmit; we had to attend a parent teacher meeting for one of our kids; and there was a problem with our electricity bill payment!

Most people think that success is a destination. “Once I get there, I can finally relax…” 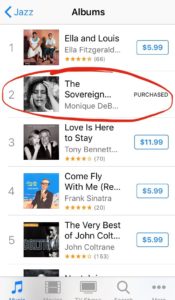 I’ve coached some of the highest performers on the planet – from Olympic athletes to Navy Seals to British Special Forces operatives to multi-million dollar business owners – and not one of them was every ready to stop and put their feet up.

Every one of them was a testament to the fact that success simply brings higher quality problems.

Every one of them continued to face struggles on their journey.

Every one of them carried inside a number of guilty secrets that they thought they could never share with anyone.

As Steven Pressfield says, the struggle with self-doubt, self-sabotage, procrastination, fear, failure and overwhelm is part of our journey.

And it will continue to be part of our journey, even after we’ve achieved the success we’ve been craving.

“The problem is we’re thinking like amateurs. Amateurs don’t show up. Amateurs crap out. Amateurs let adversity defeat them.

The pro thinks differently. He shows up, he does his work, he keeps on truckin’, no matter what.”

SO, YOU STILL WANT TO BE AN OVERNIGHT SUCCESS?

Well, just be careful not to let yourself be seduced by the ‘stars’ on American Idol or the Facebook ads that promise you a blueprint for making millions.

Overnight successes are more often than not 10, 20 or even 46 years in the making…

“Fear doesn’t go away. The warrior and the artist live by the same code of necessity, which dictates that the battle must be fought anew every day.”