I have written every day for the past 10 years. If you like to read, I've got your back - and I promise to challenge your thinking
Back to articles
November 7, 2015 • Fearless Coaching

I coached a well-known actor, who came to me one day very upset that her project had been given to an A-list Hollywood star, just as production was about to start.

You might think her anger and frustration were reasonable—she certainly thought so—and when I refused to buy into her story, she was stunned. Instead, I explained that she had created a Perfect System for the results she was getting.

I took a risk and allowed this coaching session to explore deeply into her experiences, fears and beliefs. During the coaching she shared with me some traumatic situations she’d faced as a child. And as I went deeper still, we uncovered two deeply held—yet contradictory—beliefs. The first was, “I will be safe once I am successful.” And the second was, “If I really have success, people will take advantage of me.”

This first belief had led her to greater and greater success and even fame because much of her motivation came from the idea that the more successful she became, the less people could take advantage of her.

But the other belief of her Perfect System resulted—again and again—in opportunities being “taken away” from her at the very last minute. You see, if she achieved too much success she could really be taken advantage of and there was no way she would let that occur.

I suggested that when the studio executives told her, “Sorry, we’re giving this project to someone else,” she had just crumbled and accepted it because she was secretly relieved.

She didn’t seem to believe me.

Then I asked her what would have happened if she had looked them in the eyes and said, “I don’t give a **** how famous the other actor is. She’s not me. No one has been through the experiences that I have. No one understands this project like I do. There is no one in the entire world who could play this role with the passion and tenacity and courage that I will bring to it.” 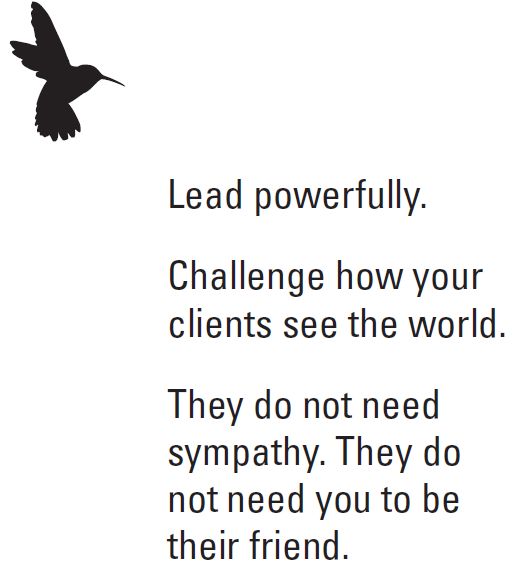 She looked at me, blinking slowly, and said, “Oh my God.”

And she just paused, in silence, for several minutes.

Finally she responded, “I really could have said that to them…”

It doesn’t matter who your client is, they are paying you to be one of the few people in the world who is willing to say the things that no one else will say.

P.S. Fearless Coaching is at the heart of everything I teach. At my next intensive, I will share my favorite tools and techniques to coach the most high-performing of clients. And the very top coaches in my community will be sharing with you their own best secrets, successes and challenges on their journey.

Every one of our intensives has sold out, so grab your seat now and save $500: www.richlitvin.com/intensive.