I have written every day for the past 10 years. If you like to read, I've got your back - and I promise to challenge your thinking
Back to articles
August 11, 2018 • Be You

Powerless, People-Pleasing, and Broken Promises. Welcome To My World.

Nobody taught me that it was ok to say no, when I was growing up.

On my first day in secondary school, at 11 years old, the teachers told us that they would be addressing us by our last names. (This was a stuffy 350 year old British private school for boys, that Charles Dickens had once written about).
I hated the idea of being called “Litvin” for the next 7 years.
But I was terrified to say no. I didn’t even know HOW to say no. So I said nothing. 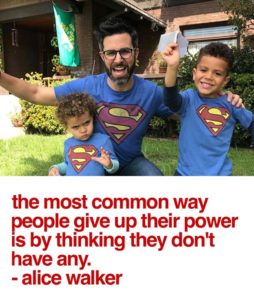 At 12 years old, I auditioned for the school play. I loved drama and this was William Shakespeare’s classic, A Midsummer Night’s Dream.

How fun! I thought.

Until the drama teacher cast me in the role of Titania.

For those of you unfamiliar with this play, Titania is a woman.

But not just any woman.

She’s the Queen of the Fairies!

Maybe times have changed, but for a young boy in England in the 1970s the thought of playing the Queen of the Fairies in a school full of boys was completely humiliating.

I came home and I cried and cried. I cried my heart out.

I still remember lying in bed, with my head under the covers – my sheets soaked in tears – cursing the drama teacher to myself.

What I find fascinating is that it never crossed my mind back then that I could say NO.

I didn’t actually have to say yes.

But that wasn’t how I showed up in life because I was the boy – and later the man – who never said no.

As a child, I lacked confidence. I felt powerless and insecure a lot of the time.

I learned to overcompensate by trying to look good, trying to impress people or trying to pretend I was ok on the outside when I was actually sad or angry or crushed emotionally, on the inside.

Later, as an adult, I built a career and later a business by saying YES to almost every opportunity that came my way. It worked to my advantage (for a time, at least) but it came from an age old belief that I was powerless and I’d be bad or wrong if I said NO to anyone.

Another flavor of me not knowing how to say no was that I spent much of my life hoping that if I SAID the right thing to you, you’d like me.

Or maybe, if I DID the right thing, you’d approve of me.

If only I could please you, then you’d finally like me. And then everything would be ok.

If I got the promotion, the money, the girl, the car, the house… then I’d finally be worthy.

But here’s the thing…

YOU CAN NEVER HAVE ENOUGH OF WHAT YOU DON’T REALLY NEED.

What I’d REALLY craved my whole life was my father’s approval, not yours.

My dad was an entrepreneur and he worked really hard and incredibly long hours, when I was growing up.

“If only I can work that hard, THEN he’ll love me.” I thought.

My parents had high hopes for me as a youngster.

“If only I can get an A on the next test, THEN they’ll admire me.” I believed.

Without knowing it, I spent much of my life trying to earn love by proving myself and by achieving more and more.

This was the story I lived into. And at one level, it worked for me because I really did learn how to achieve.

I became successful. I became well-known in my field. I accumulated money and status. I proved myself, and then some, many times over.

But something was still missing.

So, I pushed harder.

“If I can just chip away at this success mountain, THEN one day I’ll get to the top and finally my dad will be proud of me…”

But what I’d never understood was that it wasn’t really my father’s approval that I’d lacked.

He’d always loved me and been proud of me.

Somehow the message I’d taken on as a child was that if I only had YOUR approval I’d be ok. If only I could please YOU enough, then finally you’d like me and I’d be fine.

It took me half a lifetime to discover that what was really missing from my life was that I didn’t approve of myself. And I’m still reeling from the impact of that.

If I don’t approve of me there’s nothing YOU can EVER do or say that is going to have me feel good about myself.

For most of my life I thought I understood the meaning of the word commitment.

What I really understood was broken promises.

You see, I was terrified of commitment.

I’d make it LOOK like I was dedicated to achieving a goal, to keeping a deadline, or to meeting you next week.

But what I was actually committed to was an ability – in an instant – to pull out a powerful excuse that would have you totally believe, understand and enable me in walking away from what I SAID I was committed to.

Once again, feeling powerless for so much of my childhood meant that, later in life, this became the one way I could at least imagine I was getting my power back.

I finally felt in control.

No person – not even a deadline, or a goal – would ever control me again because I was willing to bail in an instant.

Except, of course, this was a toxic illusion of control.

Every promise I broke to myself or to someone else lowered my already low self-esteem just a tiny bit further.

“Broken vows are like broken mirrors.
They leave those who held to them bleeding
and staring at fractured images of themselves.”
– Richard Paul Evans

I always felt different as a child. Maybe you did, too?

But what I never knew was that it was OK to be different.

Loud noise, a lot of simulation and busy social situations could overwhelm me as a child. Frankly, they still can.

I withdrew inside, in order to cope. Reading became my sanctuary.

I spent a lot of time alone. In fact, I learned to appreciate being alone.

It was only decades later – as I built a career coaching successful leaders and training high-level coaches – that I began to see that so many others also felt different as a child.

I had a particular flavor of feeling different as a youngster because I’d get drained of energy being around other people and I’d get overwhelmed in social situations.

At the time, no one ever told me this was ok. (And actually not at all uncommon).

I learned to recharge myself by hiding away in my room, reading books. (Thankfully, this turned into a lifelong love of reading).

Later, as a teenager and then a twenty-something in London, my nightlife consisted of going out to bars and nightclubs.

I’d often feel overwhelmed by the noise and even the lights in these environments.

At parties, you’d see me in the corner, talking to one person for the whole night. Later in life, at conferences, you’d find me sitting off to one side, or standing alone at the back.

I didn’t know this at the time but around 15–20% of the population are thought to process stimuli more deeply than other people.

I’m a good listener. I can empathize with others. I can read people without them saying a word. I have high self-awareness. I can feel a lot (but learned to keep it hidden).

These qualities are actually symptoms of what scientists now call ‘Sensory Processing Sensitivity’ or even being a ‘Highly Sensitive Person’.

Both these terms were created by Elaine Aron, a research psychologist who theorized that people with more sensitive nervous systems have an innate survival strategy designed to help them better cope with the world by being “observant before acting”.

Early on in life these qualities of mine were a detriment. They confused me. I judged myself a lot for feeling the way I did.

Now – it turns out – they’re part of my gift as a coach to high performers. (I just had to go through a world of discomfort and struggle to find this out!)

As a quick aside, how we respond to these traits is culturally specific. For example, according to Aron, studies showed that shy and sensitive children in China were “among those most chosen by others to be friends or playmates.”

Boy, would I have had a different childhood growing up in Beijing!

One of the agreements I have with all of my clients is to “Hide Nothing and Hold Nothing Back”.

It’s an agreement that works in both directions. We each commit to share openly and honestly with one another.

What I find is that the less I hide and the more I share about what’s really going on inside of me, the less alone I feel.

Welcome to my world! 😉

What was – or is – your flavor of struggle in life?

And which of your struggles turned into your gifts, later in life?