I have written every day for the past 10 years. If you like to read, I've got your back - and I promise to challenge your thinking
Back to articles
March 10, 2018 • Business Building

The Power Of Closing The Doors

When Steve Chandler and I first had the idea of running an event together, we decided to have 50 people in the room.

But we only had to enroll 25 each. So that made it easier.

Ok. Who am I kidding? Back then, that felt impossible to ME!

I’d LED big events—I used to be a high school Vice Principal, so I’d spoken to rooms of 1,000 people before.

But I’d never had to FILL an event before! (Let’s be honest, I’d had a captive audience!!)

So, Steve and I walked our talk…

We used The Prosperous Coach Approach.

We literally filled this event ONE CONVERSATION AT A TIME.

We had NO email lists. We had NO Facebook groups. We didn’t even understand SEO or Google adwords. (Still don’t!!)

We CALLED people. On the phone.

Then we SERVED them.

As powerfully as we could.

Sometimes we asked for nothing. (Pure service.)

Sometimes we said, “I really want you at this event. It will transform your life and your practice as a coach.” (A powerful proposal.)

Steve and I called each other every to check in. “How many MINUTES did you spend serving people?” we asked each other.

We made it a competition!

It was a simple equation: the more time we spent serving, the more people signed up for the event.

And one day we were there… 50 tickets sold!

But then two people called us and said, we’d like to come.

Steve gave me some fantastic advice at that moment.

It’s tempting, to take their money, but let’s NOT do it.

We said 50 seats. We’ve filled them. Let’s CLOSE THE DOORS. 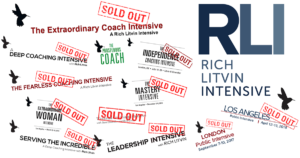 It will create a story that will ripple into the future…”

So we closed the doors.

And we Sold Out our first event ever.

And we continued to sell out our events, even when we began to run separate ones.

The coaching Intensives that I now run twice a year have a SUPPORT TEAM of amazing coaches and leaders that is almost as big as that original event Steve and I first ran, years ago!

The time we WEREN’T Sold Out!

Well, I kinda wish that every single Intensive we ran had sold out—but on ONE occasion this didn’t happen!

I’d just launched 4PC and we’d begun to talk more and more about the fact that we weren’t a company for ‘every’ coach.

I’d begun to write more and more about why I love working with high performers.

And we’d got clear as a team that — WE COACH EXTRAORDINARY LEADERS TO HAVE AN EXPONENTIAL IMPACT.

And this isn’t for everyone.

So, in our early days of sharing this mission, we began to turn off some of our original audience.

We decided that year to create an event for 150 people—our largest Intensive ever. And we only sold 130 tickets.

And I felt really sad.

(It’s the curse of being a high performer… Set a high bar to accomplish, miss it, and then beat yourself up for not hitting it while FORGETTING that it was YOU who set the high bar in the first place!!)

Well, I felt sad UNTIL I began to read the questionnaires that we ask our attendees to fill in.

The caliber of people in this room was amazing…

NOT JUST COACHES BUT MANY LEADERS WHO WERE TRANSITIONING INTO COACHING. And this is our sweet spot.

I look back on this non-Sold Out event as a watershed moment for us.

It’s awesome being Sold Out so often but it’s even more fun to get clear on your dream clients and to turn away those who are NOT your right people.

If you’d like to join us in LA this October, we have just 16 tickets left at the Early Bird price. Click this link: http://richl1.sg-host.com/intensive

TAKE ACTION… We WILL close the doors!