I have written every day for the past 10 years. If you like to read, I've got your back - and I promise to challenge your thinking
Back to articles
March 3, 2017 • Deep Inner Work 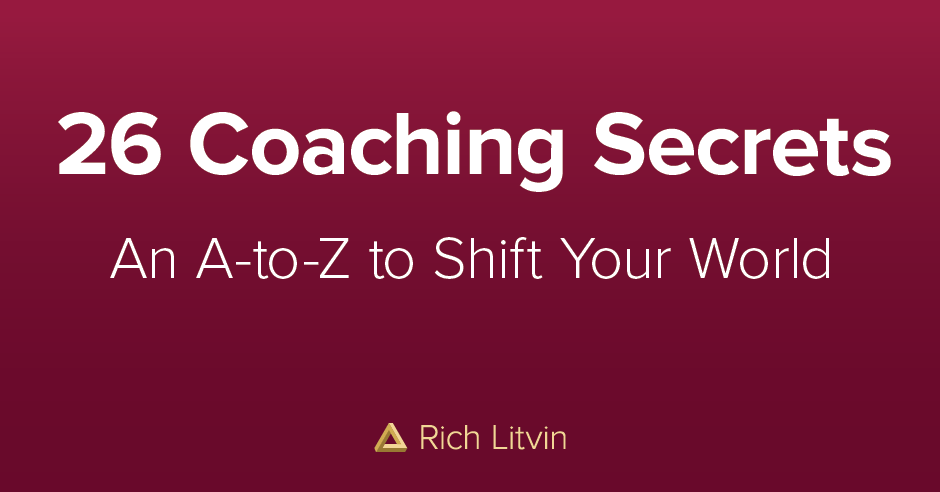 26 Coaching Secrets: An A to Z to Shift Your World

I’ve been immersed in learning about coaching since the year 2003.

Fourteen years ago, my life was very different. I was a high school teacher in West London. I had my heart set on becoming a Principal. Coaching was a leadership skill I’d been trained in and I loved it.

So when I suddenly lost my job and ran away to Thailand—very humbled and more than a little humiliated—the one thing I made sure to throw in my bag was a pack of coaching playing cards designed by Jamie Smart.

It’s no exaggeration to say that those cards changed my life.

I’ve been coaching ever since.

It’s been my full-time profession since 2007.

And I even wrote a book for coaches, with my friend Steve Chandler, that’s sold over 30,000 copies.

Recently, I spoke to 80 coaches in London at an organization called Alternatives.

I took them through an experience of an “A to Z of Coaching.”

Let me offer you a taste:

Help your clients create a powerful future from the very first words they say to you. The future doesn’t exist. It is created. And the only time you can ever create the future is right now.

We are in the relationship business. Clients aren’t “attracted.” You don’t “get” clients. You don’t “land them” or “find them.” You create them—one powerful conversation at a time.

In 1789, George Washington became the first democratically elected President of the United States. But it was 13 years earlier that the US became independent of Great Britain. Because in 1776 it DECLARED itself to be so. Anything that has ever been created began with the power of our words. What do you declare?

A great coach helps their clients lean into their edge. If you hear, “I hate you!”—said with a smile—on a regular basis, you’re doing a great job.

“I’ll be happy when…” goals rarely make us happy. Ever cherish a new car, a new job, a new partner, more money, more status… only to discover—once you got what you want—that at some point they weren’t as satisfying as you’d imagined? A friend of mine saved for years for a high-end Porsche. He just sold it because he was bored with it.

Until the very moment you’ve achieved your goal, you’re not there. The chase can motivate some people, but it can also be very demotivating.

Got a client who dreams of leading their organization in the next five years? Help them show up as a leader today. Want to coach extraordinary leaders? Imagine who you’d have to be to make that happen and then take every action and make every decision as if you already are that coach.

Successful people often struggle in unique ways, yet they rarely have anyone in their life who they can share this with. If you can create a safe enough space for them to share what they are hiding—from their board, their investors, their clients, customers and even family—you’ll change their life forever. Plus, help a high performer make a tiny shift in their life and the results will be exponential!

(See: “How to coach clients who are more successful, intelligent or wealthy than you“)

Coaching is more art than science. It requires practice, being in the moment, flow and creativity—plus the creation of trust and honesty. Don’t let your clients die with their music still inside of them…

How about you? (HINT: Clients are created. If you want to coach Kings, look for the “King” inside EVERYONE you meet.)

I asked my wife’s 95 year-old grandmother what wisdom she’d want to pass on to the next generation. She didn’t hesitate: “People have forgotten that LISTEN has the same letters as the word SILENT…”

High-performing, high-fee clients are rarely created behind your computer screen. One of my clients just invented “The Middle Seat Project.” Whenever she flies, she books the middle seat, in order to have at least two people she can get really curious about. (HINT: We’re in the relationship business. See item C.)

Audition your clients, don’t let them audition you. Set the bar high. Turn away the 9.9s if you want clients who are 10s.

Don’t be afraid of the word. In Old English the word actually means “give.” Give people value (a ton). And then give them a number. Now you’re selling. And sell a lot because the very best way to create a client is NOT to need them.

If you want to grow, don’t do it alone. It’s counterintuitive but hire great people BEFORE you can afford them. Hire slowly. (And fire quickly). Encourage your team to make mistakes. Make it your mission to help each one work only in their Zone of Genius.

Make it your mission to learn everything you can about the person in front of you. What is their deepest dream? What is their secret fear? What has them wake up at two in the morning with tears streaming down their face? And have your website use the word “YOU” ten times as often as the word “I.”

A famous blogger once told me that of all the top bloggers he knew, every one hated their first 50 articles. And none of them found their voice until they’d written at least 100. If you want to write, start writing. And then put it out in the world. Action, not perfection. If you want to speak, start speaking. Start with an audience of two people. The word “influence” comes from the Latin “to flow.” If you want to influence people, let it flow.

Hire your own coach. The biggest gift you can give your clients is to be successful. But don’t try to be perfect. Share your struggles. Being real is hard but deeply attractive.

(See: “Be impeccable with your word.“)

Help your clients dream bigger than they’ve ever dreamed because, as Tim Ferriss says:

“It’s lonely at the top. 99% of the world is convinced they are incapable of achieving great things, so they aim for the mediocre middle-ground.

The level of competition is thus fiercest for “realistic” goals, paradoxically making them the most time- and energy-consuming. It is easier to raise $10,000,000 than it is $1,000,000.

If you are insecure, guess what? The rest of the world is too. Do not overestimate the competition and underestimate yourself. You are better than you think.”

Take care of yourself because you’re the most important part of your business. A masseur said to me the other day, “Relax, Rich. You’re here for you…” That was hard to process because I spend so much of my time supporting others and I rarely let someone take care of me. Well, if it’s hard to do it for you, do it for your clients. Rest, relax, exercise, be in nature, play, eat well and sleep well. Be your own best client.