I remember the day my baby boys were born like it was yesterday. Monique’s fingertips digging into my flesh as she gripped my arm and the nursing staff challenged “Push!”

They truly were helpless and could literally do nothing for themselves. It seemed impossible for them ever to walk, let alone talk!

And yet, over the past few years, they’ve learned to do both. They’ve also both learned to swim and they’re both learning capoeira. They do dance offs, make paper airplanes and stage live presentations of their favorite stories.

My clients all thought the following results were impossible, until they achieved them…

* I coached a mother of three with an impossible dream of convincing a famous billionaire to write the foreword to her book and become President of her organization. After I coached her, he agreed to do both. And then he flew her to California to meet Oprah.

* An Olympic athlete I coached was literally world-class in her sport, yet she was struggling with internal blocks around money. I coached her around her limiting beliefs and with 24 hours of our first session together, she raised $40,000 in corporate sponsorships.

An ‘Impossible Goal’ is something you want to achieve that seems literally impossible to you right now. It’s less abstract than “World Peace”. But it’s something that inspires you—and others.

And the secret behind an Impossible Goal is that because it’s literally “impossible” for you to achieve it, you can’t immediately turn it into a 17 step plan. So, instead, it becomes a place to COME FROM, rather than a place to get to.

You’re not attached to the outcome. How could you be?It’s impossible, after all! So, instead you wake up each day and ask yourself, who would I have to BE to create this Impossible Goal?

And the thing about working on a goal that you’re not attached to—because it’s “impossible”—is that you’re often so much closer to what you want than you realize.

Let me first give you some examples and then I’ll take you through the process for yourself.

Right now members of 4PC are up to some of the following Impossible Goals:

> One member of 4PC is creating an X-Prize. She is raising $10 million to fund a prize for companies to compete to design the technology that can easily retrain people—in fields that will be obsolete in the next ten years or less—with the skills they will need for the future.

> Another is raising millions to build a school in Hawaii for children who think differently. You see he is dyslexic. And when he was at school he got his words and letters mixed up. Children laughed at him and teachers didn’t understand him but he went on to become a super successful entrepreneur, running a seven-figure company. Now he’s building a school to help bright, innovative kids like him, who just happen to think differently. And he’s going to make a difference at a national level for dyslexic children and their families.

> Another is on a mission to help people Die With Dignity, after feeling the impact of the slow and painful death of a family member with a terminal illness—and volunteering at a hospice to support people who were dying. And she’s going to use comedy to make this happen.

> Another is a fundraiser who has raised over half a billion dollars for charitable causes in her career. She’s on a mission to retrain philanthropists to do the maximum good with their money and also to help companies understand that they really can make a difference AND make a profit.
===== 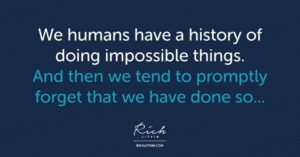 I’ll share some of my own Impossible Goal stories and introduce you to the top performers in my community at our upcoming Intensive.

You’ll be able to surround yourself with extraordinary coaches who will help you up your game. We have a track record in training and supporting the world’s most successful and exclusive coaches.

A few years ago, I took on an Impossible Goal for myself to create five $1,000,000 clients. It was less about the money than about the IMPACT these clients would be making in the world.

Remember that an Impossible Goal is a place to COME FROM, not a place to get to. So, the real question was who would I have to BE to create these 5 extraordinary clients? And each day since I’ve been living into that question.

Whilst I don’t yet have a million dollar client, in the past few years I founded 4PC, I’ve written my second book The Loneliness of Leadership, and I’ve founded a leadership consultancy for world leaders and thought leaders. On top of this, our entire community has leveled up and our Intensives, Coaching Salons and 4PC are filled with leaders and top performers—and those on their way.

1. Think of something you’d love to create that literally seems impossible right now.

2. An Impossible Goal is NOT an “I’ll be happy when…” goal. Ask yourself,“Will I be fine whether I achieve this or not?”

If it turns out that your life, your happiness or your relationships depend on you achieving it, it’s not an Impossible Goal. It might be a useful project but not for the purpose of this exercise. Return to Step 1.

3. There’s a fine line between excitement and fear. Your Impossible Goal should place you right on that line. Excited enough that you’ll take action, not too excited that you’re not grounded. Enough fear to be a clue that you really want this, not so much that it causes you to panic and freeze.

4. Ask yourself what the cost of achieving this goal could be. And then add a few words to your Impossible Goal to address this. (For example: “I make $480,000—and it’s fun and easy.” “I have a 7-figure business—that creates more fun, freedom and time with my family.”

5. Now, ask yourself this question every day about your Impossible Goal: Who would I have to BE to make this happen?

6. Finally, find someone to hold this Impossible Goal for you—someone who believes in you. A coach, a mentor, a colleague.

I’m really proud of the community of high level coaches we’ve created over the past few years. This is a group of people who are up to big things. And over and over again, I hear how blown away people are by the generosity of this community.

Our community can be the place that holds YOUR Impossible Goal for you. So join us at our upcoming Intensive, this April.
http://richlitvin.com/intensive