Today’s blog is a little different because I’m not sharing my own story, I’m sharing my wife’s.

I am super proud of Monique and what she’s been creating this past year and today I want to tell you the back story – with her permission:

Life doesn’t always bring you what you want.

But sometimes it brings you what you need.

Every one of us has faced challenges, fear or heartbreak in our life.

Once in a while we’ve also experienced – or we know someone who has – having to handle all three at the very same time.

In early 2017, Monique was given the diagnosis of a desmoid tumor.

Doctors told her that the best she could hope for was to take pharmaceuticals for the rest of her life and hope it stayed the same size.

Second opinions recommended surgery. They would need to cut out part of her abdominal wall.

But Monique has a Master’s degree in Spiritual Psychology and she chose to listen to her inner knowing – her intuition.

Spirit told her that she needed to ask the tumor what it was here to teach her, instead of blindly following ‘Doctor’s orders’.

She literally dialogued with the tumor. And she heard the message that she was hiding who she was. It told her that she could no longer protect others at her own expense. And it ‘demanded’ that she speak her own true, authentic voice.

And that’s what she did.

A Created Life vs A Reported On Life

Most people live a Reported on Life.“The economy is tough… My boss is unfair… My boyfriend doesn’t understand me…”

They react and respond to life. Often they complain about it.

But there is another way to approach life. And it’s as a Creator.

Despite (or even because of) the circumstances you face, you get creative.

You take responsibility for the circumstances. Not to judge yourself or to blame yourself. And not even because you necessarily ‘really’ created them.

You understand the word responsibility has two parts: Response-Ability. You have the ability to choose your response, whatever the challenge you face in that moment.

Let me hand over to Monique for the next part of the story:

“In the past year, I’ve written and performed a show that has been challenging because of its sensitive material. It has required from me a great deal of compassion, courage and strength of heart. And it has shown me clearly how weak, challenged and unpracticed I am at managing matters of my creative life.

Writing the music for my album was challenging too, because I wanted to see myself and share it all in the lyrics. I also set an intention to have it nominated for a Grammy 2019. And holding the project in this way requires a great deal of me.

Finally, managing my own health has required more faith than I’ve ever felt comfortable expressing. Someone once said to me that for me to heal my own body, I would need to have so much faith that people would judge me for it.

And despite all of this going on inside of me, I have created work that I am so deeply proud of.

1. “Mulatto Math: Summing Up the Race Equation in America”.

[Rich: this is Monique’s one-woman show about growing up mixed race in America. It had a sold out season at the Whitefire Theater, it won a Producers’ Award at the prestigious Hollywood Fringe Festival, and it’s coming to New York in September for the Solo Theater Festival.]

2. My third album, The Sovereign One. The first single to be released is called “Damaged Goods”.

“We’ve recently discovered Monique DeBose, a Los Angeles native, who blurs the borders between soul and jazz, delivering instantly classic sounds that we’re digging. ‘Damaged Goods’ opens with Monique’s rich, velvet vocals and builds in intensity as the impressive group of musicians that Monique has tapped for this album match the power of her expressive lyrics.”]

There were times when I tried to side step the messages that the tumor had shared with me because I was scared.

You see, it asked me to pour everything out of me.

I dug deep and had spirit guiding me throughout the entire journey.

I reclaimed my voice, my desire, my joy, my rage, my passion, my freedom in creating this project. And I partnered with some of the very best in the music industry to create it.

This album is called The Sovereign One.

And it also refers to “remedies or medicines that are extremely potent.”

The music that poured out of me rearranges cells, changes the chemistry of the body and expands consciousness. And when I went for my most recent MRI, the tumor had begun to shrink.” 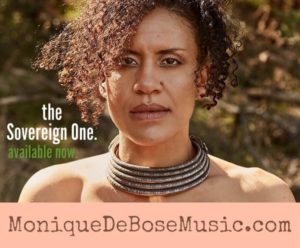 Like you and I, Monique is in the transformation business. And she creates transformational music with a lot of soul. I am so proud of her.