I have written every day for the past 10 years. If you like to read, I've got your back - and I promise to challenge your thinking
Back to articles
September 27, 2022 • Rich Litvin 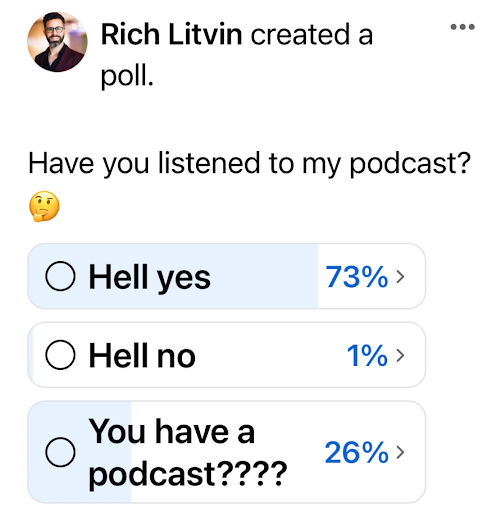 I’m regularly astonished by how little I know…

I’m regularly astonished by how little I know. The universe often slaps me and says, ‘Don’t get too cocky, son. You’ve got a lot more to learn!”

I read an interesting article that suggested even when it feels like you keep telling your audience about something, you’ll be surprised at how many still don’t know about it.

When you think you’ve told them enough, tell them again because so many still have no idea it exists.

I was a little skeptical, so I created a poll about my podcast in my Facebook group, to check out the truth of this idea.

The responses blew my mind because I’ve had a podcast for over 3 years. I’ve recorded 135 episodes. I’ve written about it, spoken about it, posted links to it — and yet this poll tells me that over 25% of my audience don’t even know about it.

My first book, The Prosperous Coach, is about how to create clients, one conversation at a time. It struck a chord in the coaching world and has sold over 100,000 copies to date.

By the way, I’m just finishing the final edit on my second book, The Powerful Coach. (Yippeeee!)

It’s a playbook on how to enroll high-performing, high-fee clients – no SEO, social media or internet marketing needed.

I took a break from editing the book to write this article because I’m constantly surprised at how much I still need to learn about life, business and coaching…

I have a book that’s been in the top 20 books on coaching for almost 10 years. I have an audience of over 40,000 people. I have a book that’s taught in most coaching trainings around the world. Yet, it never dawned on me that I should keep talking about things I’ve been doing for years because some members of my community still don’t know about them.