I have written every day for the past 10 years. If you like to read, I've got your back - and I promise to challenge your thinking
Back to articles
June 23, 2020 • 1 Insight 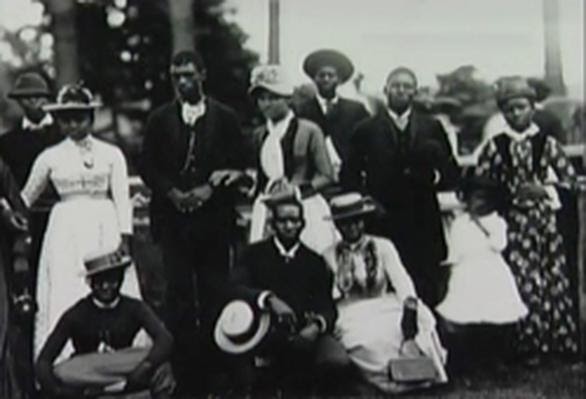 Do what you feel in your heart to be right, for you’ll be criticized anyway

The title of this article is a quote from Eleanor Roosevelt, who is the longest-serving First Lady of the United States. Her support of the civil rights movement in the 1960s led to the Ku Klux Klan announcing a $25,000 bounty for anyone willing to murder her.

It’s 2020 and it staggers me that we’re still fighting for equal rights.

When my wife was a kid in the 1980s, she’d stay with her African-American grandparents for the summer. They lived in North Carolina. And they’d drive the kids an hour each way to the beach.

It was only – years later – as an adult, that Monique discovered there was a beach just minutes from her grandparents home.

In theory, The Civil Rights Act of 1964 ended legal segregation in the United States; but in practice, it took years and many cases in the lower courts to enforce it. So, in the 1980s her grandparents still drove for two hours, across state lines, to what had for decades been the “Black beach” rather than the “White beach” close to their home.

Habit? Fear? Does it matter? It’s terrible that they were still making this choice.

In 1860, before the Civil War, Wilmington was majority Black and the largest city in the state, with nearly 10,000 people. 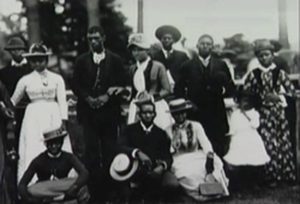 In 1868, North Carolina ratified the 14th Amendment to the U.S. Constitution. It granted citizenship to everyone born or naturalized in the United States – including former slaves. It guaranteed all citizens equal protection of the law.

It was the Republican Party that had emancipated enslaved people and given them citizenship and the right to vote. The Democrats greatly resented this ‘radical’ change. And many defeated Confederate veterans joined the Ku Klux Klan (KKK), which orchestrated violence at elections in order to suppress the Black vote.

In 1898, a Georgia socialite was promoting lynching to solve the threat of “the black rapist”. She advocated that white men should resort to vigilante justice to protect white women. 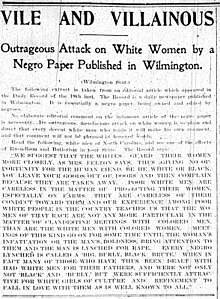 Alex Manly was the editor of Wilmington’s Black newspaper, the Daily Record. He wrote an editorial condemning lynching. He pointed out the hypocrisy of describing Black men as “big burly, black brute(s)” when in reality it was white men who regularly raped Black women with impunity. He added that some relations between the races were consensual. 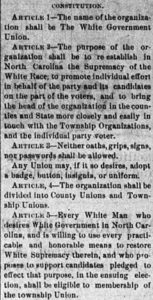 The day after the election, a mob of 2,000 armed men marched to the Daily Record building. White women waved flags and handkerchiefs as they passed. They burned the Daily Record to the ground. 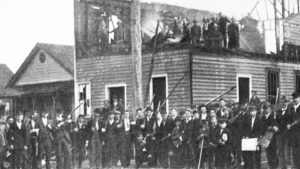 Mob posing by the charred ruins of The Daily Record after the 1898 massacre. Photo from the Library of Congress

Black citizens and their white allies were terrorized. Their property was destroyed. They were ambushed with weapon fire. Men and women were kidnapped from their homes and whipped at night. A parade of white men marched through black neighborhoods – firing into Black homes and a Black school. The march ended at a park, where a thousand people greeted them with a picnic and free barbecue. 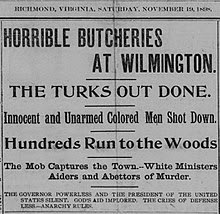 The White Supremacists then forced the Republican Mayor, the board of aldermen, and the police chief to resign at gunpoint. They banished all the remaining prominent Republicans and Black people from the city.

This was a coup d’etat – the violent overthrow of a duly elected government, by a group of white supremacists. On American soil.

It was carried out with impunity. When Charles Aycock became the 50th Governor of North Carolina, he gave a famous speech in 1903, about how North Carolina had solved “The Negro Problem.”

Within weeks of the massacre, the white press in Wilmington began describing the massacre as a race riot, caused by Black people. In fact this was the first time that the phrase “race riot” had ever been used.

It was only over time, as more facts were publicized, that these events have come to be seen as a coup and a massacre.

It’s 2020 and it staggers me that we’re still fighting for equal rights.

Wikipedia defines The Civil Rights Movement as a decades-long struggle that ended in the late 1960s. It was led by African Americans to end legalized racial discrimination, disenfranchisement and racial segregation in the United States.

Yet, African Americans are still dealing with legalized racial discrimination and disenfranchisement.

Monique and I are about to partner together to contribute – in at least some way – to bringing justice, healing and freedom to Black people in the United States, using our unique skills.

PS. Credit to the Zinn Education Project and Wikipedia for background to this piece.