I have written every day for the past 10 years. If you like to read, I've got your back - and I promise to challenge your thinking
Back to articles
November 21, 2018 • Be You, Fearless Coaching

I loved to sing. And, at 10 years old, I was excited to join my junior school choir.

We had our first ever practice.

It was such fun.

I could sing with other people. Wow. This was awesome.

And then the teacher said, “Stop! Who’s singing out of tune?”

I wondered, What’s she talking about?

We began again, and I noticed her scanning the choir one by one.

“Stop!” She raised her voice this time.

“You.” she said, pointing directly at me.

My head down, my shoulders slumped, hot tears streaming down my burning face, I walked ever so slowly out of that classroom.

My experience was intense, but I know I am not alone.

Because that’s so often how we treat performance or art or writing or coaching or leadership.

If you’re good, keep going. If you’re not, then stop. Forever.

Carol Dweck’s research on Mindset has shown that how we view our world has a massive impact on our future success.

If we have a “fixed” mindset:

But if we have a “growth” mindset:

When it comes to leadership and coaching, I have a Growth Mindset. I screw up constantly. It’s how I learn. I watch the success of others, to learn from them. I head towards challenges.

When it comes to dancing, for much of my life I had a Fixed Mindset. You can do it. I can’t. When I get on the dance floor, everyone is looking at me. I don’t want to screw up because you’ll laugh at me. I watch amazing dancers and tell myself, they are gifted and I’m not.

I’m not likely to ever become a professional dancer(!) but I’ve really improved over the years. I’ve taken salsa lessons and African dance lessons and even dance classes with my wife. And one of my boys’ favorite night time activities is our regular family pajama dance parties! 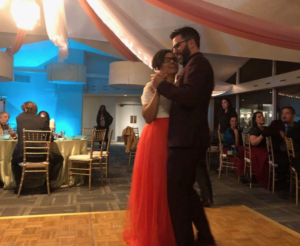 This is Monique and me at a friend’s wedding, recently.

If you ever want to let go of your story that you can’t dance, I highly recommend that you watch the video, Girl Who Learns to Dance in a Year.

You see, dancing is a skill.

Put learning above looking good, embrace challenges, keep going when you fail, learn from criticism and look for the lessons and inspiration in other’s successes.

I love language, so I looked up the word “art.”

It comes from the Greek word artizein, which means “to prepare” or “fit together.” A few centuries later, the Latin word artem meant “a practical skill, a business or a craft.”

There’s a reason we talk about a “work of art.” You see art originally meant a skill developed through learning and practice.

But for the past 7 centuries, since the dawn of the Renaissance, we got a little messed up in our thinking and art came to mean:

“the expression or application of human creative skill and imagination… producing works to be appreciated primarily for their beauty or emotional power.”

Art became about the end result rather than the process of creating.

26 times, I’ve been trusted to take the game winning shot and missed.

I currently have about a dozen current and former clients who are in the process of writing books. Two of them already have contracts with big mainstream publishers. And one was just told by a top publisher that her memoir is “utterly gripping!”

In 2019 in 4PC, our focus is on a year of skill building. A year of getting our art out into the world.

This means that we need to be ready to slay some dragons!

Dragon #1: The Dragon of Product

When you’re about to throw out your book, your video or your podcast and start again because your publisher, an ‘expert’ or your mum said “That’s not very good…” or “That won’t sell…” Or the voice in your head says, “You need to be the best…” – that’s the voice of the Dragon of Product.

The Dragon of Product sucks the energy right out of creativity. This dragon is strongest when you focus on what other people think. It fights your spontaneity.

Dragon #2: The Dragon of Control

When you’re worried about being too emotional, or being revealed as you truly are (the good, the bad and the ugly) or about being seen screwing up – that’s the voice of the Dragon of Control.

Dragon #3: The Dragon of Meaning

The other day, my boys and I were listening to the words of Bohemian Rhapsody, the song by the British rock band Queen, written by Freddie Mercury.

This song is one of the best-selling singles of all time and frequently considered one of the greatest rock songs ever. But if you tried to interpret or analyze it you’d struggle!

I see a little silhouetto of a man

(I’m just a poor boy, nobody loves me)

He’s just a poor boy from a poor family

Spare him his life from this monstrosity

Easy come, easy go, will you let me go?

Bismillah! No, we will not let you go…

When you approach creativity like an intellectual pursuit, you stifle your creative genius – that’s the Dragon of Meaning.

The Dragon of Meaning fights your intuition and creativity by demanding interpretation and logical answers. It asks, “Why are you doing that?” And it gets angry if your response is “Because I want to!”

We’ll be writing books, creating blogs, putting ourselves on stage and on camera.

Because of who we’ll become in the process.

Wanna slay some dragons with me as your coach?

Five years ago, I wrote a book with my friend Steve Chandler that’s sold over 50,000 copies. But here’s the thing. I was writing every week for over 5 years before I ever wrote that book.

The purpose of your art – your book, your blog, your TED talk, your Facebook Lives – isn’t how much you sell. It’s who you’ll become in the process.

4PC is not a program. And it’s not a training. It’s a community of top performers – with me as your coach, for a year or more. Some of our founder members are about to begin their 5th year.

Don’t be a genius. Join a scenius…

“Scenius” is a term coined by musician and producer Brian Eno to counter “The Lone Genius Myth,” or the idea that the only people who make a real impact are a few Special People.

4PC is my Scenius.

In January 2019, we’ll meet in Santa Fe, New Mexico — one of the oldest cities in the United States. It is a fascinating city with a rich, diverse artistic history. It’s actually the third largest art market in the United States, behind New York and Los Angeles. But, it’s unconventional, idiosyncratic, and quirky. Like us.

We’re meeting under the open skies and the starkly beautiful high desert landscape of New Mexico because it’s a place that changes not just your outer life but also your inner life. As DH Lawrence wrote of it in 1928, “Touch the country and you will never be the same again.”

Santa Fe is a hothouse of talent and IQ – with an extraordinary concentration of Ph.D.’s, and more artists than any American city its size. And 4PC is a talent hothouse for extraordinary top performers.

Later in the year, we’ll meet in San Diego and Los Angeles. It’s going to be a transformational year.

Send me an email and put “4PC” in the subject line… tell me a little about you and what you’re up to, and we’ll begin a conversation.

P.S. Whenever you’re ready… here are 4 other ways we can help you increase your income and your impact: