I grew up in England but I live in the United States. Which means that I see America through the eyes of a stranger…

Everything was new to me when I first arrived in California, in 2006.

I remember being on a bus in San Francisco, when the driver closed the back doors before a man was able to get to them.

He didn’t hesitate. At the top of his lungs, he shouted, “DRIVER! OPEN THE DOORS, DRIVER!”

The driver immediately stopped. And the man got out of the bus.

Yet, I was stunned.

You see, that simply wouldn’t happen in England. Us Brits are taught to be so reserved.

On a recent trip to the UK, I witnessed the very same scene play out on a London bus.

The doors closed before a woman could get to them. She looked flustered. “Oh my gosh,” she said, in a whisper. “That was my stop…” she breathed, as the bus drove off.

The driver was completely oblivious to what had just happened. And the woman now had an extra 15 minute walk to add to her journey.

What would an American do?

A few years later, I was back in London on a family trip. This time I had something new with me. Two little kids in a giant, orange colored, double stroller!

I’d managed to squeeze this ginormous object into the back of a red London bus, with the boys asleep inside it. And when we arrived at the stop by my Mum’s house, I was struggling to manoeuver it through the people tightly packed alongside us, when the bus doors began to close…

It was a moment of choice for me.

Because I had 2 ways this could play out…

My Default Future: I could lack confidence, feel uncomfortable and do nothing.

Or a Created Future: I could take my courage in my hands… And I could do what I imagined an American would do!

My heart was thumping loudly, in my chest.

People politely moved out of my way and some even helped me get the stroller off the bus.

And there I was, standing on the side of the road, with my two little boys.

And a smile on my face.

What would Rich do?

One of my favorite coaching tools is called, What would Rich do?

When a client has a question, a challenge or a dilemma that shows up between our coaching sessions, I ask them to tell me two things.

Frankly, it doesn’t matter whether or not they guess what I would actually do.

You see, for the moment they are answering the question, they are not being themselves. They are letting go of a lifetime of limiting beliefs. And they are trying on a completely new way of being.

And most of the time, that new perspective is enough. It’s enough for the glimmer of a new idea, a new insight or a new possibility – that they couldn’t have seen a moment earlier.

Here’s a challenge for you:

Talking of people you love and admire, one of my friends – a man who I truly love – tragically passed away this week at the age of 40. 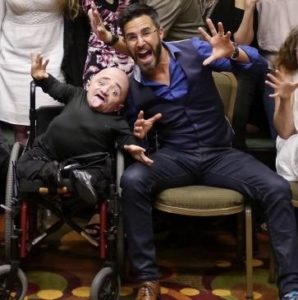 Maybe you’ve heard me talk about Sean Stephenson. He was born with a rare bone disorder and was expected to die at birth. He reached a height of only 3 feet and suffered more than 200 bone fractures by the time he was eighteen years old. Sean lived his whole life, confined to a wheelchair.

He faced so many reasons to give up, and he had endless opportunities to embrace self-pity.

Yet he become a motivational speaker and author. He taught countless people how to be more impactful from the stage. And his friends included Bill Clinton, Tony Robbins and Richard Branson.

Sean’s “Dance Party” video has had over a million views. I’ve played it so many times at my Intensives, over the years. It can get a crowd of hundreds of people moving their bodies, in seconds!

He is the smallest, yet most powerful man I have ever known. And over the years we’ve coached and guided and supported one another. We’ve shared deep secrets with one another. And we’ve challenged the heck out of one another.

As I write these words, I have tears in my eyes. I can’t believe he’s gone.

But I know Sean would never want me to leave things on a sad note. So, let me invite you to shake your booty, alongside my great friend, Sean Stephenson…