I have written every day for the past 10 years. If you like to read, I've got your back - and I promise to challenge your thinking
Back to articles
June 2, 2014 • Creating Clients, Creating Community

I Don’t Want To Be A Leader!

I DON’T WANT TO BE A LEADER!

That was my battle cry from the age of ten years old.

Although, underneath it was a secret heartfelt desire for nothing else than to be a powerful leader.

Let me take you on my painful life journey around leadership.

1. LEARN FROM THE PAIN

I was just 10 years old when I learned my first uncomfortable lesson about leadership.

It was a bright sunny day in June when the Headteacher of my Primary school—a wizened old nun named Sister Francesca—called me in to her office.

Frankly, I was a little scared as I entered her room. I’d never been inside it in my life. As I stood there—a shy little boy, quietly looking up at her—her face crinkled into a smile and she said, We’re making you School Captain.

I had no idea what to do with this information.

I knew nothing about leadership.

I had no clue why they’d decided to foist this role upon me.

In fact, I didn’t have the faintest idea what a School Captain even was.

And what strikes me as strange—even to this day—is that she never chose to tell me.

She just pinned a shiny badge to my lapel.

And that was it. I was now, without further ado, a leader for the very first time in my life.

And—for the first of what would be many more times—I had absolutely no idea what to do with this new leadership role. I was just a naive and rather overprotected little ten year old.

So, a few days later, when I spotted a couple of the kids being naughty, I told a teacher.

That’s what a leader does, right?

A leader protects the moral and ethical values of the organization and prevents the breaking of behavioral boundaries and calls people to a higher standard.

I just saw two kids fighting and I told a teacher because I thought I was supposed to.

And then came my rude awakening.

Those kids mocked me and picked on me for weeks after.

And I learned the hard way to ask clearly about the nature of a role before saying yes to it, from then on.

What I learned most about leadership, over the following twenty years, came from two main sources:

Firstly, from my time in the Boy Scouts—where I had mainly positive role models. And I experienced the challenge of being pushed outside my comfort zone on a regular basis, in order to lead.

I discovered that I was rarely ‘ready’ to lead.

But I didn’t need to be.

I just accepted a new responsibility and did what I thought was right—mistakes, struggles, failures and all—and eventually people would acknowledge me for my successes.

My second source of learning was from observing so much of the poor leadership I experienced at every level of every organization I worked for.

Sadly, the poor leaders outweighed the good leaders by a huge percentage.

But this wasn’t all bad. I really did learn so much about what NOT to do.

In a fast-paced, quick-changing world, it’s really good for me to be clear on my non-negotiables as a leader.

4. BE A PASSIONATE STUDENT OF LEADERSHIP

I continued to seek out leadership roles and responsibilities over the years and it was in 1997 that I was appointed to my first senior leadership role.

And once again, I learned more from my mistakes than from any other source.

And I also learned by being a passionate student of leadership. I devoured every leadership book I could find. Particularly biographies of powerful and unusual leaders.

I learned simple tools that made a huge difference:

I’d write hand-written notes to acknowledge my team members on a regular basis.

And I found out years later that I became known for these letters and cards—and that most people never forgot them.

I learned to ask my team members about their favorite leader and why they inspired them.

I recall one young woman telling me that her best ever boss would meet her on a Monday morning to discuss her mission for the week. He’d trust her completely and leave her alone for the rest of the week. Then, on a Friday, he’d come into her office, put his feet up on a chair and ask her to share her successes and her challenges.

After that, I would meet her every Monday. I’d trust her completely and leave her alone for the rest of the week. Every Friday, I’d come into her office, put my feet up on a chair and ask her to share her successes and her challenges. When I left she told me I was the best boss she’d ever had.

Leadership was challenging. But it wasn’t difficult.

5. THE ONE THING THEY NEVER TEACH YOU AS A LEADER

In 2005, recently appointed as Vice Principal of one of the most challenging schools in London, I was bursting with ideas to change the ways that students were taught and to support teachers in their classrooms.

I filled a bookshelf in my bright shiny new office with ALL the books on leadership that I’d gathered over the years.

I was so proud of that bookshelf.

Everyone who saw it was impressed with my collection of books on Leadership.

And then, just a few weeks after I started I was fired from that job.

I can still feel the burning shame of packing those books into my car.

And I drove slowly home, too humiliated to even say a proper goodbye to my students.

Any thoughts of being a leader had left me completely as I sobbed my heart out on the journey home, preoccupied with the one thing they NEVER teach you as a leader—how do you tell your mum and dad that you’ve just been fired?

The very next day I took ALL my Leadership books to a charity shop.

I made a very clear decision that the principles I’d learned were either IN me or they weren’t. And I let ALL my books go.

6. RUN AWAY FROM LEADERSHIP

I spent the next few years secretly running away from being a leader.

What actually made me most powerful as a coach was the pain I’d experienced of FAILURE in a leadership role.

Afraid of leading, I began to turn my attention to diving in DEEPER than ever before with just ONE person at a time.

That was an easy choice for me. No more team building. No more managing upwards. No more written reports.

It was such a relief.

In fact, they seemed to seek me out.

But I kept turning them down.

I was invited to run a center for coaching and wellness at a tropical resort. It sounded like a dream project. But something in my gut said no. And I walked away.

I was invited to lead a group of amazing coaches. But I felt a lot of fear and I said no. Once again, I walked away.

I accepted the role of CEO of the personal coaching wing of a hugely successful business coaching company.

And I felt his words deep in my body. I knew immediately that I had only accepted the role of CEO because I assumed that a cool title would bring me ‘dream’ clients. And, truthfully, I was afraid of running a coaching business as ‘just’ me.

I was scared. After all, who was I without a great title and a organization behind me?

But I trusted my heart and I quit my first new leadership role in years, the very next day.

My favorite quote on leadership is by Margaret Thatcher:

If you have to tell people

I learned this one the hard way because for much of my life I’ve been preoccupied with trying to ‘look good’, ‘prove myself’, and getting the ‘right’ credentials or the ‘right’ titles.

As I stepped into coaching I discovered the complete reverse was true for me.

The LESS I tried to ‘look good’ or ‘prove myself’ the more clients wanted to hire me.

The LESS I thought about credentials or titles—and the more I focused completely on the one person in front of me—the more ‘my people’ sought out a powerful conversation with me.

Authenticity and vulnerability—were no longer to be feared—they were the ONLY path to follow.

9. THE TRUE TEST OF A LEADER

My favorite leadership test has always been simple:

If you want to know if you’re a leader, turn around and see who’s following.

Leaders have followers. That’s all that counts.

And one day I turned around and I began to see I’d been quietly creating an incredible community of coaches.

If you’re reading this, you’re probably one of them.

But there’s an even more powerful test of leadership:

I’m so honored to watch what is occurring for the members of each of my communities: The alumni of my Prosperous Coach Intensives, the graduates of my Confident Woman’s Salons, the past members of my ‘secret’ group, The Three Musketeers.

And now Team Litvin from our Liberia mission.

Again and again, I see leaders being created.

This used to scare me because I wanted to be seen as the leader. I didn’t want any one to eclipse me.

Ok. If I’m honest, those feelings STILL come up.

But I’ve learned to accept them. Because they are the path to something so much more inspiring.

I’ve been so honored to watch members of my communities who joined me on an incredible trip to Liberia—David Taylor, Rafael Bejarano, Wendy Sue Costa, Shelley Lynn, Richard Morgan, Mirian Dias, Simon Crowe, Anni Silverdale and Joelle Macklin—show up as powerful leaders. Leaders who I am PROUD to serve alongside. 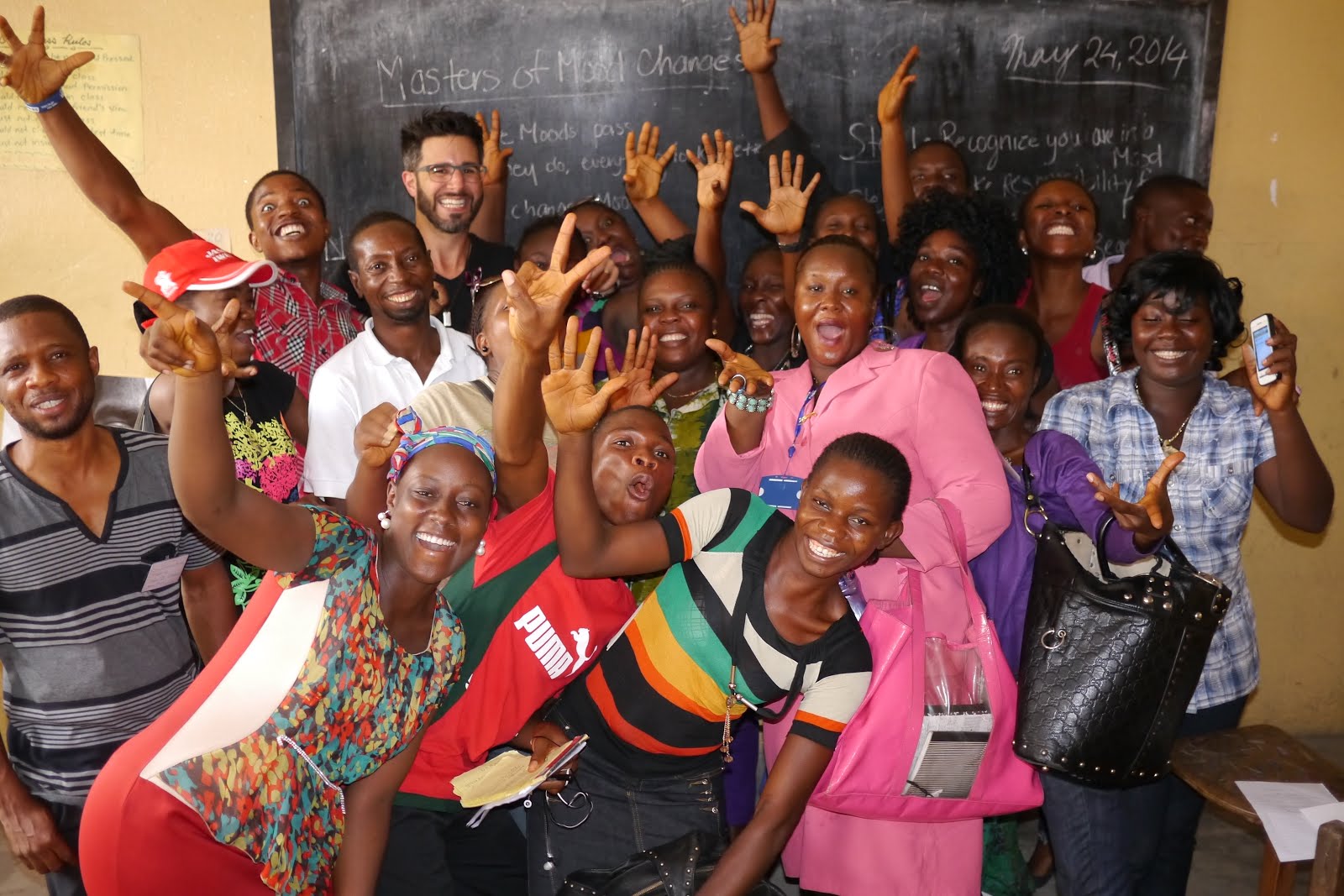 I’ve spent years studying and immersing myself in the Art of Leadership.

But I learned more in the past ten days in the heat and amidst the challenges of our trip to Liberia than I’ve learned in years.

PS. If you enjoy these articles, please follow me on facebook, where you’ll be able to read things and watch videos that I don’t post anywhere else: https://www.facebook.com/photo.php?v=10152416943050498

PS. Set yourself up for dramatic success in 2022, by joining me on the Deep Dive. One spot left. Buckle up… You'll be joining a small group of coaches who include: a former advisor to the United Nations, a former Navy seal, a former Vice President at the Walt Disney Company, a coach to leaders at the BBC, a coach to leaders at Fortune 500 companies, a trusted advisor to Family Offices and a former investment banker who managed billions of dollars of assets.

Plus, whenever you’re ready… here are 3 ways we can help you grow an extraordinary coaching business—one conversation at a time: