Receive exclusive savings and be the first to know when tickets are available.

Our most powerful life experiences take place in the context of immersion. That’s because all three of our primary forms of learning — thinking, feeling and doing (mind, heart and body) — and all three sources of information — ourselves, others and our environment — are involved. But this intensive isn’t about “information.” It’s a learning experience focused on taking action.

When we say we want you to actually create clients, we mean it. At every intensive we’ve run, participants have signed new clients or re-signed previous clients before the event was even over.

Hear participants describe their experience at a Rich Litvin Intensive.

Get Ready to Feel Uncomfortable.

Much of the design of this event will be based on your questions, your case studies, and on your actual clients (or potential clients).

We’ll coach many of you live, in front of the room. And my coaching is high flame.

I make a commitment to serve you, not to please you.

I promise to hold nothing back.

I’m not here to be your friend.

I’m here to help you succeed as a coach. 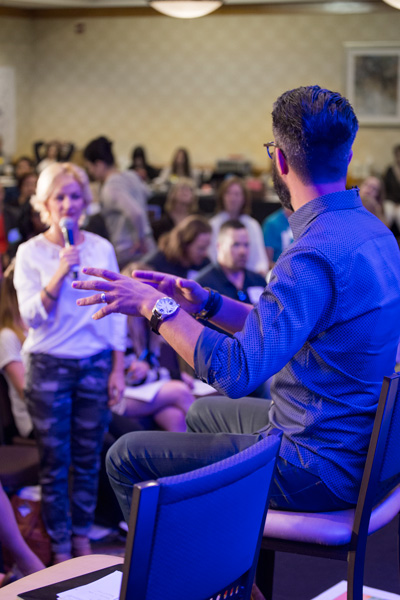 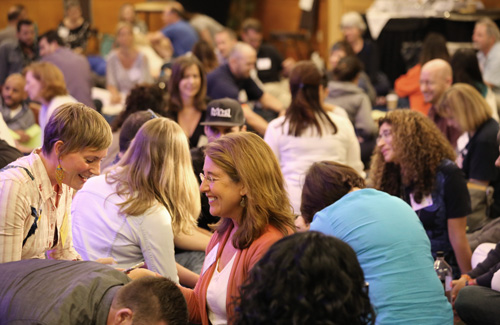 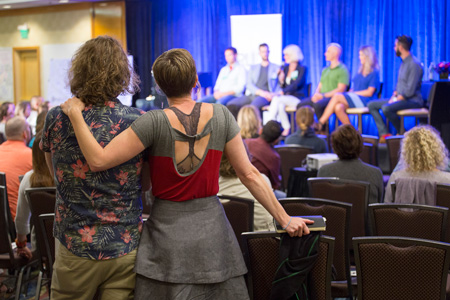 DO YOU LOVE COACHING

Are you sick of “boom and bust” cycles?

Does talking about money tie your stomach in knots?

Does marketing make your head spin?

I know exactly how you feel, because I’ve been where you are now.

It’s a little embarrassing for me to admit it now, but I earned just $4,500 in my first year as a full-time coach, even though I had trained with some of the best coaches in the business. That was before I learned the secret of being a truly successful coach – one who thrives all the time rather than merely living hand-to-mouth.

Before I figured it out, I hated the process of enrolling clients. I thought it was something to “get through.” Every time it came time to talk about fees, I could feel the number getting stuck in my throat. My heart would pound in my chest and I’d have to remind myself to breathe. I could feel my face getting warmer and warmer as I got tongue-tied.

After I finally managed to get the number out, the pause in conversation seemed to last forever. My brain would race: “Oh god, it’s too high. I knew it was too high. Should I offer them a discount? … I totally screwed this up.” And, if a client finally did say yes, I would feel “lucky.”

If any part of this story strikes a chord with you, I have some good news for you.

You are not alone.

Many great coaches struggle with the dreaded "business side" of what they do.

It’s not because they lack coaching expertise—many are amazing when they finally get in the room with a client. But as anyone who has tried to build a coaching career knows, the key piece of the puzzle is getting yourself into that room.

I didn’t always have a life this great. I used to be afraid of selling. It was really hard and it didn’t feel like me. In fact it felt yucky, gross, inauthentic and scary. I was afraid of being bothersome, pushy or disliked. Sometimes I even felt guilty when asking for more money. And I was definitely afraid to ask for high fees because of my fear of being rejected.

At that time I was newly married, eager to prove myself to my wife, my friends, and my family in this new career called “coaching.” Yet I watched my checking account go in the wrong direction for month after painful month, eating up all of my hard-earned savings. I knew I was a damn good coach, but my bank account didn’t show it. I felt like a fraud. Every time I heard another “no” my self-esteem died a little bit more.

My self-confidence was directly linked to the amount of money in my bank account. All of this meant that I needed each client far more than they needed me. I knew something had to change, or things would only get worse. 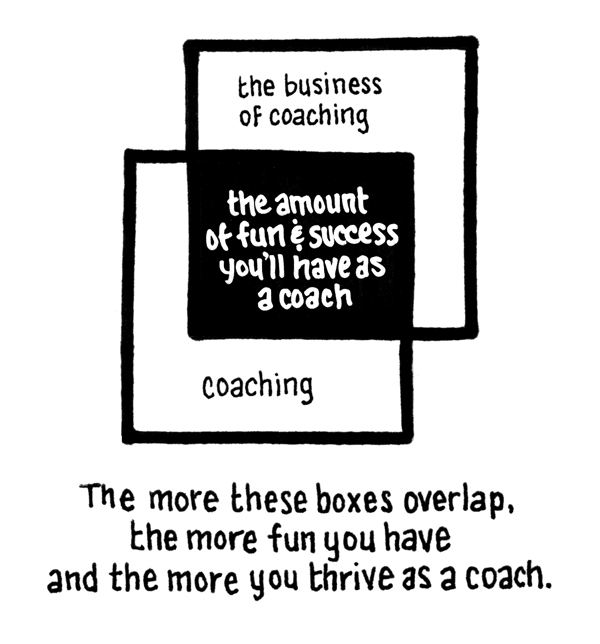 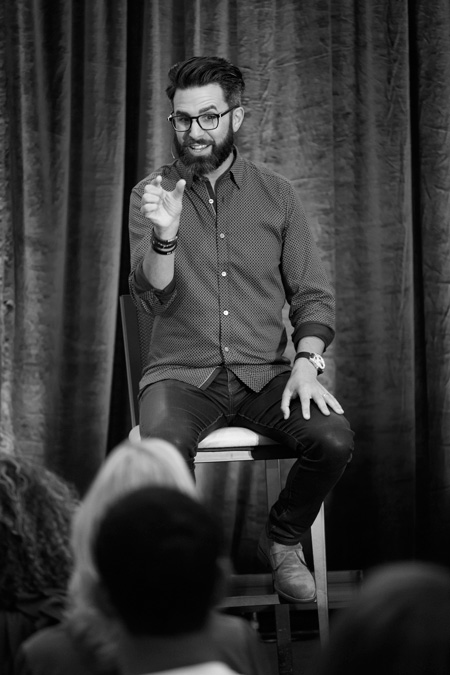 Rich Litvin teaching about exponential success. The tiniest shifts can change everything.

Today, I have a deep sense of inner confidence about my ability to create prosperity as a coach.

Whilst I still have ups and downs with cash flow, I no longer use my bank account as a way to make myself feel bad—or good. And I know how to create the income and clients that support a lifestyle I love.

There’s no magic formula, but there are powerful principles behind what I do and teach.

I’ve put these principles to work in my own coaching practice and I’ve seen them help hundreds of coaches completely reinvent their practices. And each of them has done it their own unique way, by utilizing their natural strengths.

Get a sneak peek of the Intensive experience: 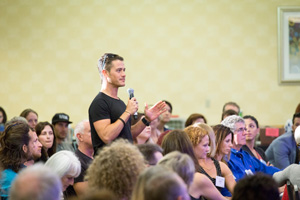 Be prepared to bring your client challenges into the room. There are many opportunities throughout the intensive for Q&A and hot-seat coaching. 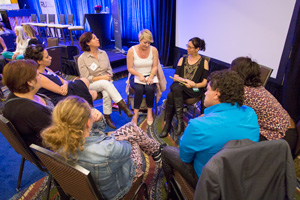 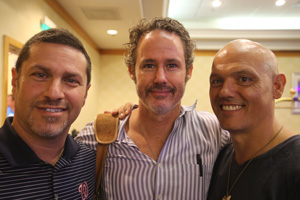 Many coaches tell us that the best part of the Intensive is the conversations they have with other people in the room. Expect to leave with new friends and collaborators.

Your clients are far more powerful than they know. (And so are you.)

Always remember that the client in front of you is far more more powerful than they know. They are far closer to what they desire than they could ever imagine.

“There’s a type of great coach… A mysterious type who often go overlooked, because what they do doesn’t look like coaching. It looks more like magic. Because these people have the ability to alter someone’s destiny in the time it takes to eat lunch. They aren’t about the how or the why — they’re completely, utterly about the who. Their core skill is to see someone in a way that they don’t yet see themselves; to give their lives a larger narrative, sense of belief, a higher purpose.”

That’s what WE do.

And that’s what YOU will be doing when you join us at a Rich Litvin Intensive. 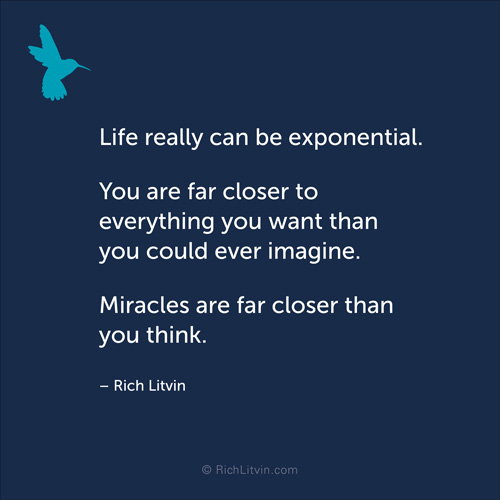 "This intensive has transformed the way I run my coaching practice."

“I feel much more relaxed around money. I no longer have the need to constantly prove myself worthy. And I know that I can create clients from a place of love and service instead of from a place of neediness.

If you want to work with only a few high-achieving clients per year, and if you hate traditional marketing and sales, do yourself and your future clients a favor and go to this intensive.”

“Everyone in the room was in the same place. Some were more engaged and others still figuring it out. But no one was an expert. Each person was looking to better their services and follow their path. And I see that there is no ‘one’ path — only my path. While there are tools and many options I just have to find out what works for me. It was a life changing intensive and I truly enjoyed Rich’s willingness to give and give more to ensure we had an overflowing cup.”

"If you are committed to turning pro as a coach, this is the place to do it."

“This Intensive is for coaches who are ready to go big and take their coaching and their business up three levels. It is not for the feint of heart. This was the most powerful professional development experience I’ve had and has challenged me to play a much bigger game with my clients and my prospects. If you are committed to turning pro as a coach, this is the place to do it.

My confidence has soared as a result of this intensive…I’ve only been back one day and I’ve already had transformational experiences with several clients!”

"I’ve stopped thinking I need to create the perfect system or website."

“This intensive dives deep into what it means to be a coach, rather than how to be a coach. You get the opportunity to be amongst coaches of all levels who demonstrate their value of coaching by opening up and being coached by Rich in front of the group. There really isn’t any advice or information given without a discussion or demonstration of its practical application. I’ve stopped thinking I need to create the perfect system or website or really that I even need to have some official qualification to start serving as a coach.”

Join us in Los Angeles and London

Rich Litvin runs a boutique advisory firm for world leaders and thought leaders, based in Los Angeles and London. The methodology is deep coaching. Bespoke. Not time-based.

He is an expert at taking high-achievers to the greatest levels of success. Ultra-successful people – people you would assume don’t need a coach – are the ones who call Rich.

Rich is the founder of 4PC a community of the top 4% of coaches and entrepreneurs.

Members of this extraordinary group include seven-figure business owners, a consultant to The White House, a coach to leaders at The World Bank and the CEO of a wolf sanctuary.

A thought leader in the coaching world, Rich is co-author of the highly-acclaimed book The Prosperous Coach, that has sold over 25,000 copies.

He is the founder of The Confident Woman’s Salon and The High-Achieving Introvert Project. And he is a member of the Association of Transformational Leaders.

His second book, The Success Paradox: Your Greatest Gifts Are Holding You Back is due to be published in early 2017.

A scientist by training, he has a background in Behavioral Physiology and Psychology. He trained to teach at the University of Oxford and he has a master’s degree in Educational Effectiveness.

His big picture is to mobilise $100 Million for charity, through his connections. And The Litvin Group has helped to build five schools in Africa over the past two years.

Rich has lived and worked in eight countries and on four continents. His wife, Monique, is an award-winning singer/songwriter. They are the proud parents of two little boys. An introvert at heart, Rich still gets nervous walking into a party. 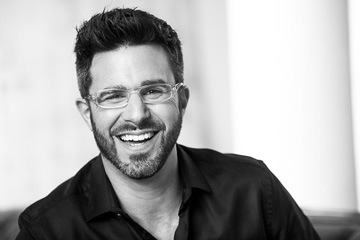