I have written every day for the past 10 years. If you like to read, I've got your back - and I promise to challenge your thinking
Back to articles
June 28, 2019 • Deep Inner Work

You Can Get Paid To Mess With People’s Thinking…

When people ask, “What do you do?” I like to reply, “I get paid to mess with people’s thinking!”

In this article, I’m going to show you three things:

1. The impact of messing with people’s thinking

I recently coached a woman at one of my Deep Dives. She had a track record of success as an executive, building extraordinary businesses for other people. And she’d transitioned from being an executive to being a coach.

So, I messed with her thinking…

I helped her see that with over two decades of experience helping scale multi-million dollar businesses, people weren’t paying her as a ‘new’ coach. They were investing in more than 20 years of talent and expertise.

She went back to one of her clients who was paying $30,000 for coaching. She helped her dream bigger than ever before. She helped her see new possibilities. And she challenged her thinking. Then she put a new $100,000 offering on the table.

The client said yes immediately and now she has her first $100K client.

About four years ago, I coached a client who began the session with the words, “I don’t know what to be coached on today…” (These are my favorite words to hear when working with top performers).

We began to chat. No agenda. No problem to solve.

This client was an Air Force veteran, with a background in aerospace.

I spent the next hour messing with her thinking.

A question I asked her during that conversation was the inspiration for her co-founding an exponential technology company that has just earned a billion dollar valuation.

2. The reason you need to mess with people’s thinking

Why would super successful, highly intelligent or ultra wealthy people need anyone to mess with their thinking in the first place?

Well, if all that was needed for success was intelligence, then you’d never have scandals epitomized in the story of Theranos or Enron.

If all that was needed for success was prior success, we’d still have Kodak, Blockbuster, Lehman Brothers, Pan Am, Tower Records, Polaroid, Arthur Andersen and Borders Books.

And if all that was needed to create more wealth was having a lot of money, then Francis Ford Coppola wouldn’t have filed for bankruptcy – twice. Michael Jackson wouldn’t have been $500 million in debt when he died in 2009. And Boris Becker, who used to be one of the world’s wealthiest tennis players, wouldn’t have lost millions and declared bankruptcy in 2017.

As a coach, I know that what got my clients here, won’t get them there. You see, success has many traps and temptations built into it:

As you become more successful, you often outgrow your old community (and even old friends), but it can be challenging to let them go.

There’s a temptation to surround yourself with people who admire you, think like you, or act like you.

Being surrounded by people who say “yes” to everything you say is seductive. But it can lead to conformity and poor decision making, which will only hold you back from your next level of success

Success is tiring. You can get to the top with just enough energy to take care of your business – and no more.

The ROI of an extra hour in the office is tangible. You can literally calculate the number of extra dollars it will bring.

The ROI of an extra hour with the family is intangible and if you’re not really fully present, can actually lead to arguments and stress.

Working harder and harder on your business is also seductive. But completing your second 8-figure exit doesn’t feel so good when your wife is about to leave you or your kids have stopped talking to you.

Success is often driven by a sense of ‘never enough’. It’s why so many highly successful people have achieved everything they ever wanted, only to feel empty on the inside.

A study at Purdue University found that the ideal income point is $95,000 for life satisfaction and $60,000 to $75,000 for emotional well-being. Yet, TV and advertisements would have us believe there is no ceiling when it comes to how much money is needed for happiness.

Building wealth, recognition, and a great reputation are also seductive.

What most often leads to success in life and business is a willingness to break the ‘rules’, to do things differently and to feel uncomfortable.

But, as you become more successful, the temptation is to not rock the boat, to not break any rules that might jeopardize your current or future success.

The irony is that the more successful you become, the further you can move from the very traits that led to your success in the first place.

3. How to mess with people’s thinking (it’s simpler than you think)

How do I mess with the thinking of super successful, highly intelligent or ultra wealthy people?

I help them look for the simplicity on the other side of complexity.

We live in a world where you can make a lot of money selling simplicity. Look at all the ads in your Facebook feed selling “7 Steps to 7 Figures” or “The Morning Rituals of Billionaires.”

I googled “how to become a millionaire” and the first article that showed up has this deeply profound piece of advice: “Read at least 30 minutes a day, listen to relevant podcasts while driving and seek out mentors vigorously.”

It’s written by someone who apparently became a millionaire at the age of 22. It fails to mention, what I found out when I researched him, is that he’s in his family’s commercial real-estate business.

Simplicity sells. This article was in Fortune magazine.

Beyond simplicity, there’s a whole world of consulting that’s based on selling complexity.

There’s a reason McKinsey has an annual revenue of more than $10 billion. If you can make a lot of money selling simplicity, you can make even more selling complexity.

THE SIMPLICITY ON THE OTHER SIDE OF COMPLEXITY

People are impressed by complicated things.

As the British advertising director and author Dave Trott, puts it: “Complicated seems clever to stupid people. Smart people know that you have to go beyond complicated to get to the simple.”

“If you’re going to act on a problem that is monstrously complex and uncertain, a stripped-down, rules-of-thumb response is not only good enough. It can be superior to tripping over yourself in pursuit of something that appears marginally more accurate.”

And Einstein explained that there are five ascending levels of intelligence: smart, intelligent, brilliant, genius and simple. 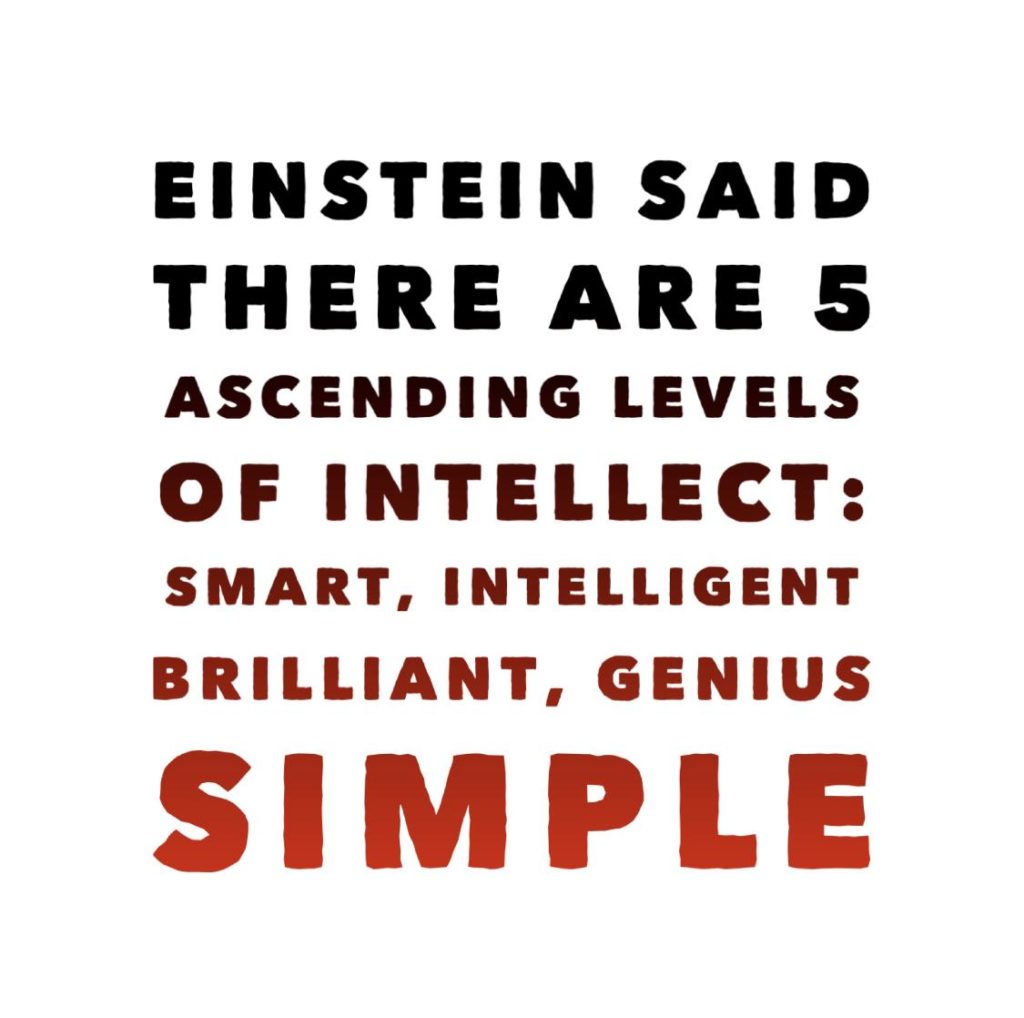 As a coach to extremely talented top performers, I don’t have to be more of a genius than them.

That would be hard.

Most of them have a track record as one of the very best in their field.

Messing with a client’s thinking looks like being able to see where they are not looking and gently pointing them in that direction.

Messing with a client’s thinking is listening to them so deeply that you can hear what isn’t being said. And then calling it out.

Messing with a client’s thinking is remembering that even a genius has limitations. And having the confidence to say things to top performers that most people would never dare to say.

It’s simple. But not easy.

She was a member of 4PC, my community of top performers. And when she signed her first $150K client, I asked her to share in our private Facebook group how she did it.

She said she would but two weeks later I called to ask why she hadn’t yet done so.

“I tried to explain it,” she replied, “but it wasn’t any different to how I signed a $10K client…”