I have written every day for the past 10 years. If you like to read, I've got your back - and I promise to challenge your thinking
Back to articles
December 27, 2022 • Rich Litvin

A friend of mine is literally a rocket scientist. He has been working at NASA’s Jet Propulsion Laboratory (JPL) for over 33 years.

Since I coach around insight – and a single insight can change everything – I am always on the lookout for tiny shifts in my thinking that can have a big impact. At NASA, I had three insights…

I like to think big. And much of my coaching is helping people – who already think big – to think far, far bigger.

(For example, I have a client who is raising $100 million to change the future of work. She facilitated a meeting of futurists, philosophers, scientists and military veterans at the Institute for Human and Machine Cognition, as the first stage of her mission).

But NASA showed me ways that there are truly no limits on what you can conceive and then turn into reality.

The Jet Propulsion Laboratory was founded over 80 years ago. It primarily constructs and operates planetary robotic spacecraft. Some of its projects include the Curiosity Rover (a car-sized vehicle that’s exploring a giant crater on Mars – a $2.5 billion mission), the Mars Reconnaissance Orbiter (a $720 million spacecraft, that’s exploring Mars from orbit), and Juno (a spacecraft orbiting Jupiter – a $1.13 billion project).

Mars 2020 is a rover mission that will be searching for the possibility of past life on Mars. Here I am next to a $2.5 billion robot vehicle. It will be 40,000,000 miles away, on the surface of Mars. Incredible. 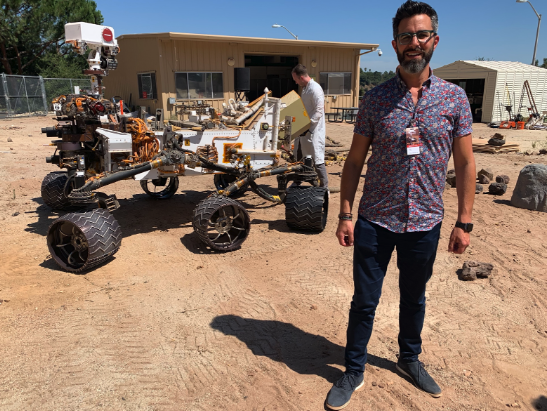 I was interested in the fact that NASA plans its missions a decade or so into the future and I asked my friend, John D. Baker, about that. He said that’s actually short range thinking. Long term thinking for him is thinking 100-150 years into the future!

John has worked on the Mars Rover and studied how to send humans to Mars. He worked on the Lunar Reconnaissance Orbiter – a robotic spacecraft that’s currently orbiting the Moon – and he developed payloads for the Space Shuttle.

His most recent mission was building two tiny, briefcase-sized spacecraft called CubeSats. They are nicknamed “WALL-E” and “EVE” after the stars of the Pixar movie. And they flew successfully to Mars in 2018.

Here’s John with a model of one of his tiny spacecraft. They are not designed to replace larger spacecraft but they have incredible potential to carry cameras and scientific instruments out to deep space. And they are a big part of the future of robotic space exploration because of their low cost. It was ‘only’ $18 million to deploy them, compared to billions of dollars for every previous mission. 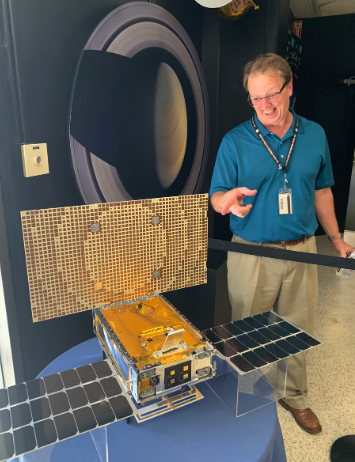 On July 7, 2003, NASA launched a Mars Rover called Opportunity. It embarked on a 283 million mile journey to hunt for water on Mars.

Despite a cost of around $800 million, it was only designed to last for 90 days because it was expected that dust settling from the Martian air would pile up on the solar panels and eventually the rover would fail from lack of power.

But then something unexpected happened.

Gusts of Martian winds repeatedly acted as cleaning events, wiping the dust away.

In fact, the Opportunity Rover stayed operational from January 2004 to June 2018.

It exceeded its operating plan by 14 years and 46 days.

It was originally intended to travel around 1,000 yards but it actually crawled more than the distance of a marathon – 50 times its original target – during its long and accomplished life.

Dan Sullivan taught me the importance of setting a big 25 year mission and then setting small goals every 90 days. If you do that and then review them, 90 days later, each 90 day time period is just 1% of your big mission.

I love this concept.

4PC – my community of extraordinary coaches and leaders – is my big 25 year mission. We are 7 years in.

We’re already doing extraordinary things and we’re drawing more and more fascinating people to us. And yet I’m only barely into my mission.

90 day goals take off all the pressure. And it’s astonishing what you can accomplish.

In June 2019, a monster dust storm finally silenced Opportunity for ever. Yet it has has generated an immense scientific legacy that will help with the work of NASA’s still-active Curiosity Rover and the Mars 2020 Rover that you saw above.

You’ll be surprised at what you create.

With a friend who is a leader at NASA, we were able to enter Mission Control. One of my friends noticed that they were using Sun workstations for their computers. It was amusing because here we were at NASA and yet the computers they were using were built by a company that went out of business, years ago. Not exactly state-of-the-art, right? 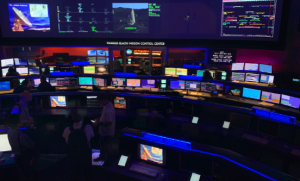 That’s true, said John. But you have to remember that we are still running missions that were launched over 40 years ago!

On September 5, 1977, NASA launched a space probe called Voyager 1 to study the outer Solar System. It has been in operation for over 42 years!

It still communicates with the Deep Space Network to receive routine commands and to transmit data to Earth. It’s now 13.6 billion miles away from us – the most distant man-made object from Earth.

In late 2017, the Voyager team completed a successful test of the spacecraft’s thrusters. It was the first time they were fired since 1980. This trajectory correction has enabled the mission to be extended by two to three years. It is now expected to continue until about 2025 when its nuclear generators will no longer supply enough electric power for it to operate.

In Project Kairos, I am leading a group of coaches who are former CEOs, Senior Executives and founders. Much of my job when I support a high level leader who has transitioned into coaching, is to have them turn around.

It’s often very uncomfortable but I have them acknowledge the ‘headlines’ from their former career. I have them ‘brag’ about their past successes (by the way, it’s not bragging if you’ve done it!). And I get them to truly own their accomplishments.

It’s often scary when a leader leaves the corporate world, or a business they have sold and decides to reinvent themselves as a coach.

It’s far less scary when they turn around and pay attention to what they have accomplished until now.

One of the problems we face as visionary leaders, dreamers and big thinkers, is that we are always off in the future, pondering what we are going to create next. The dark side of this gift is that we rarely turn around to see what we are proud of.

Try it right now. Turn around and ask yourself: What I have accomplished in the past 90 days? What am I proud of? 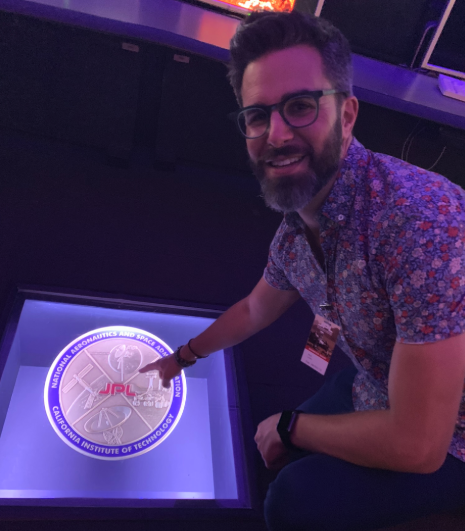 I’ll leave you with this photo of me, literally at the center of the universe…

You see, NASA picked this point to measure every distance from. It’s in the JPL control room.

At the bottom of this plaque, just out of view in the photo, are the words, “Dare mighty things”. It’s part of a quote by Theodore Roosevelt:

“Far better it is to dare mighty things, to win glorious triumphs, even though checkered by failure, than to rank with those poor spirits who neither enjoy nor suffer much, because they live in the gray twilight that knows not victory nor defeat.”