I have written every day for the past 10 years. If you like to read, I've got your back - and I promise to challenge your thinking
Back to articles
May 24, 2014 • Creating Community

Stop looking for clients who you can inspire 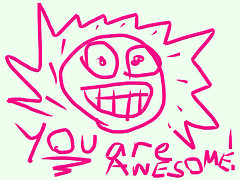 Here’s the thing—I call it CREATING clients for a reason. Even if someone doesn’t inspire you at first glance, if you are willing to set a high bar for who you work with, you can draw out a sense of powerful inspiration from the person right in front of you. You can quite literally ‘create’ a client:

Here’s a story that Evercoach Rasmus Carlsson sent me about what happened when he refused to believe his story about a potential client:

“Last October I connected with a woman who was mentally in quite bad shape. She suspected her negative thinking might have something to do with it, and after we’d had a chat I invited her to a long coaching session to dig deeper.

It turned out that she was suffering from depression and severe anxiety disorder. Her therapist wanted her to start CBT but explained she was too ill to do so. She was told to take some pills and wait for it to get better.

She didn’t have a job, didn’t make any money and was constantly arguing with her breadwinning husband.

She would lie in bed until noon, neglecting her small children, and had to choose between either cooking or taking care of laundry, as she couldn’t manage both in the same day.

The poor woman was a wreck, but something in her was fighting to live. She intuitively sensed that taking the drugs would only make her worse, so she threw them away and lied to the therapist to keep receiving her sick benefits. The only thing she wanted was to feel all right so she could take care of her kids and be a good role model for them.

She inspired me to invite her back for a few more sessions. We talked about her victim thinking and how she was creating her reality via thought and how all her stories were really illusions.

I challenged her, she saw the humor about it, and we laughed together. And she felt better – to the point that she said she wanted to see me on a regular basis (and now the therapist said she was way too well to receive CBT). So she asked how we could make that happen and how much it would cost.

We co-created a coaching program – 6 months of biweekly sessions plus phone follow-ups in between. I said it’s $10,000 up front. She had a hunch that it was going to be a lot of money, but I could still hear her jaw drop on the phone.

Now, this is a woman who doesn’t even have $1,000 in the bank, let alone $100 to spare by the end of the month. She has house mortgages, credit card debt, you name it, but I dared to refuse to buy into her story about how she was broke and couldn’t afford it. And then she said “Okay, I don’t have the money right now, but I’m going to get them. I just don’t know how.”

Because I saw how committed she was to making this work, I offered to coach her on her money-making, without charging for it. So we did that during the winter, and boy did she step up her game! She applied for jobs, called tons of people and got out of her rut.

She had a garage sale to earn $2,000. She sold what was left on eBay to earn a couple of hundred more. In the past she used to be a Tupperware home party sales rep. She said she was quite good at it but had to stop because IT STRESSED HER OUT – another story she was believing (hint: she was just believing her stressful thoughts).

Now guess what, she found the INSPIRATION to create 13 super-home parties in January, drawing on all her contacts and every old trick in her book to make it happen.

She busted her ass.

She cried from the setbacks.

I challenged her again, and she persevered.

And she called me the day after to say that she’d actually made more than that and that she wanted to pay me all of it right away and get started with our coaching.

I said great, but do you realize you don’t ‘need’ a coach?

She said yes but I WANT one.

And I’m telling you, this woman is on fire. She’s the most inspiring person I’ve worked with so far.

She had to wait a few days to collect her sales commissions, and her first payment arrived in my account shortly after. This woman has transformed from victim into owner and is now creating her new life, and it’s beautiful to behold.