I’ve been married 10 years today. And I love what Monique posted with this photo.

“Wedding day. Ten years ago. I think I’m finally starting to get this thing called marriage…”

If you’ve been our facebook friends, you’ll have seen lots of happy, smiling photos of us over the years.

We actually both try to share pretty honestly and openly about our relationship. But we obviously don’t take photos in the midst of an argument, a fight or a disagreement!

So you could get the impression that 10 years of marriage has been a breeze.

In the past 10 years together we’ve laughed a lot and we’ve also argued a lot.

We separated for a while back in 2008. (If you’ve been to Monique’s one woman show, she shares some of that story quite openly).

We’ve faced a bunch of challenges, we’ve shed more than a few tears, we’ve shouted at each other, never thrown anything, definitely used a lot of bad language.

And once the doors close to our house, I am very grateful that you will probably never see the ‘little boy’ in me who shows up, every time he feels “disrespected”. In fact, I’d probably be mortified if you ever saw that side of me. 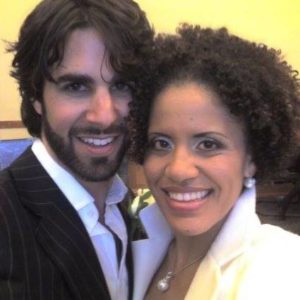 Until about ten years ago, I was always the one who bailed on relationships.

It was very hard for me to stay committed.

However, I’m embarrassed to admit that it wasn’t easy for me to leave relationships (read No More Mr Nice Guy if you are curious) and I’d often just make things so uncomfortable that my partner at the time would leave first…

But something changed when I met Monique.

I made a decision to be ALL IN.

I was not going to bail.

I’ve been close a couple of times. And so has she. But I somehow knew that this time I was fully in. No matter what.

I made the same decision with coaching.

I was fully in.

I sold my house in London to fund the first two years of my career. I very consciously burned my bridges. I am not necessarily recommending it but I didn’t want a way back.

I made the same decision with 4PC. I am creating something that I am all in on for 25 years. Which means we’re about to start Year 4/25. We’ve barely scratched the surface.

Can I guarantee that I’ll be a coach in 10 years? Celebrating my 20th wedding anniversary in 2027? And celebrating the 25th anniversary of 4PC in 2040?

Well, results are always out of our control.

But commitment. That’s on me.

What are YOU willing to COMMIT to for the next ten years—no matter what?