I’m writing to you from Croatia – at the heart of Europe.

The history of Croatia reminds me of the old Zen story of a farmer and his son.

The Second World War saw appalling brutality in the country. Over 80% of the Jewish population (32,000 people) were rounded up and sent to extermination camps to be murdered, between 1941 and 1945. At least 25,000 Roma – virtually the entire Roma population – were killed. And Serbs endured pogroms and extermination camps – hundreds of thousands were murdered.

During World War II, a man known as Tito became the leader of the Partisans. They are often regarded as the most effective resistance movement to fight the fascists in occupied Europe.

He led the anti-fascist struggle with a vision for a postwar Yugoslavia, based on uniting Croatia and Serbia.

Yet, his presidency has been criticized as authoritarian, with serious repression of his political opponents. Then again, most Yugoslavs considered him popular and a benevolent dictator.

By 1991 the Serb minority within Croatia was demanding independence and the Croatian War of Independence was fought from 1991 to 1995 between Croats and Serbs.

The war ended with Croatian victory – it had achieved independence and preservation of its borders. Yet at what cost?

Over 20,000 people were killed in the war and 500,000 refugees were displaced on both sides. Almost 25% of Croatia’s economy was ruined, with an estimated US$37 billion in damaged infrastructure, lost output, and refugee-related costs.

Minefields planted across the country during the war have no maps or patterns and as of 2019, there are still about 31,000 mines buried along the former front lines. Croatia has spent approximately 450 million Euros on de-mining since 1998. The cost to complete the de-mining is estimated at 500 million Euros or more.

In the two weeks I’ve spent here so far, the scenery is stunning and the Croatians I’ve met have been friendly and funny. (My mum joined us for a few days and I was teaching her to use the Uber app on her phone. The first day she used it, the Uber driver pulled up and cracked up with laughter. “What’s going on?” we asked. “You’re so old to be using this technology!” he said to my mum. “No one your age in Croatia would use an app to call a taxi!” My mother was just slightly offended. But then I cracked up, too!)

A client once called me in a panic, to tell me about a terrible situation he was facing. He almost convinced me that this was a real nightmare. But I caught myself just in time and said, “You’ve got this.” And he handled it.

The job of a great coach isn’t to buy into the stories their clients bring. It’s to help them to live into more powerful stories.

Another client – an actor – asked me to help him prepare for what he called a “once-in-a-lifetime” audition with an A-list director. Instead of helping him the way he hoped, I spent an hour showing him all the ways this could be the worst acting gig he ever had! Then he could walk into the audition relaxed rather than stressed. And he nailed it.

As I am writing this, my 7 year old just punched my 5 year really hard in the chest! Monique comforted the little one and I went to chat to my older son.

“What happened?” I asked.

“He was laughing at me,” he replied, pointing at his little brother.

This will be fun! I thought. And I began to explain to my son how his thinking was creating his reality. What was upsetting him was his thinking, not his kid brother.

As William Shakespeare once said, “There is nothing either good or bad, but thinking makes it so.”

We’re staying in a city called Pula, which is the site of an old Roman amphitheatre. The sixth largest surviving one in the world. It’s also one of the most well preserved.

It was pretty incredible to stand in an arena that was used by Roman gladiators 2,000 years ago. 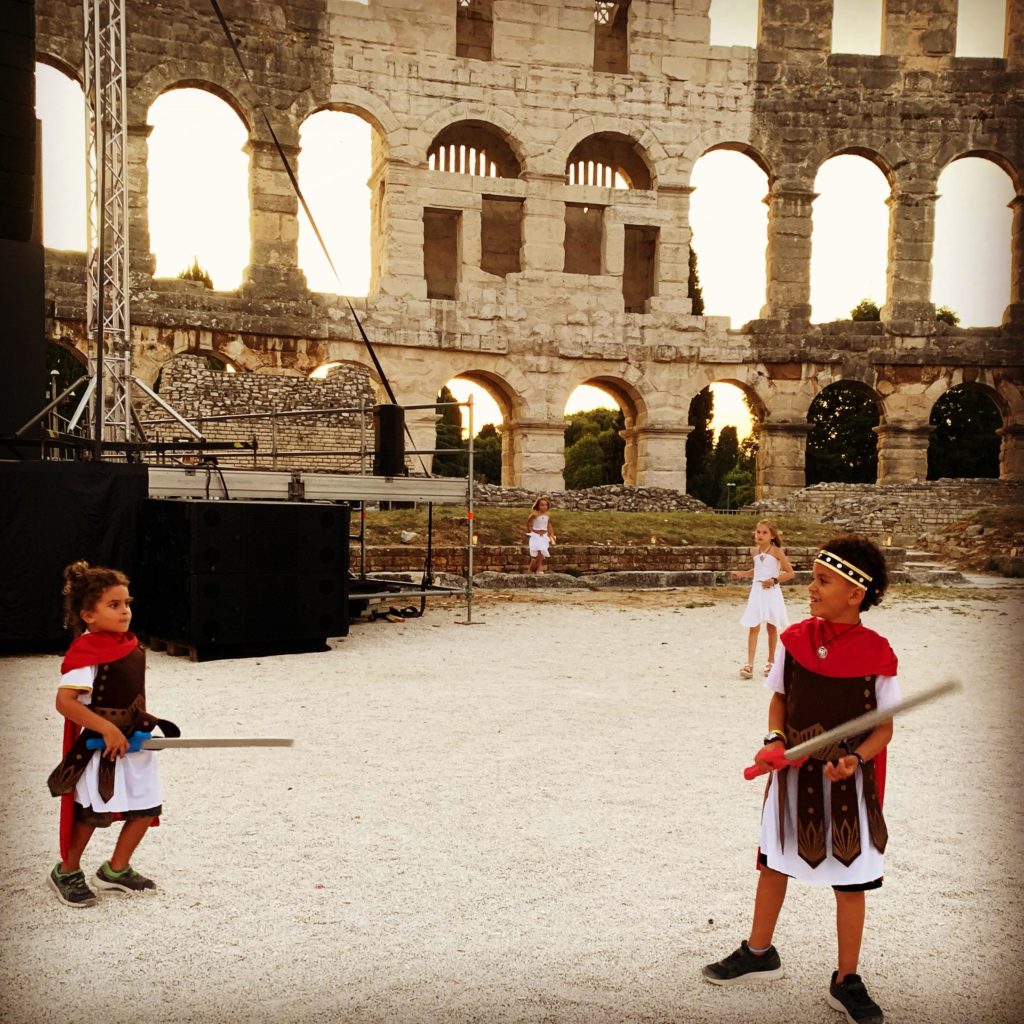 This photo is of my boys, preparing for combat.

There were literally trap doors under the ground so they could release lions and other wild animals to kill the remaining fighters, if the Emperor was getting tired of the games. I tried to imagine the terror of the slaves or prisoners who must have known they were about to be mauled to death by a starving beast but it was just too much for me to even conceive what that must have been like.

This amphitheater was the site for gladiatorial combat for 400 years, until they were prohibited by Emperor Honorius. And it was the site for combat between convicts and wild animals, for almost 700 years.

I love etymology and I learned that our modern word ‘arena’ comes from the Latin word harena which means sand.

You see, the floors of arenas were packed with sand to mop up the blood of the dead. The sand was then sprayed with rose oil to cover the stench of the decapitated limbs and the blood that soaked into the ground.

In the Middle Ages the Pula arena was used for tournaments by the Knights of Malta and medieval fairs. And then, in modern times, it’s been the site for performances by Foo Fighters, Luciano Pavarotti, Jamiroquai and Elton John.

When in Rome, right?

One of the most important concepts I teach to clients and to coaches can be summed up in just two words: Be You.

If you want to build a boutique practice with a handful of high-performing, high-fee clients, you can’t copy others. You have to be unique. As Ursula Le Guin once said, “You have to make a virtue of your peculiarities.”

But once in a while it’s fun to not be you and we went to a party where we got to be Romans for a night! 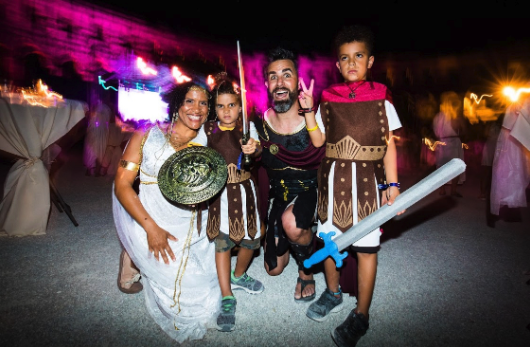 P.S. I have one spot available later this year to work with me as my Apprentice.

If you want to truly fly as a world-class coach, you will have me as your personal coach for 13 months, you will become a member of 4PC for 2 years, you’ll get access to every program I run, plus behind-the-scenes access to my business – from my team meetings to our big transformational events. You even get a ticket to attend every future Intensive – in perpetuity.

It’s a $100K investment and you’ll need to be committed to your future success as a coach.

Just send us an email and put Apprentice in the subject line and I’ll get you all the details!