I have written every day for the past 10 years. If you like to read, I've got your back - and I promise to challenge your thinking
Back to articles
June 10, 2017 • Be You

The photo on the left is of 45 year old Elon Musk looking cool. As well he might, as the 80th-wealthiest person in the world—with an estimated net worth of $15.2 billion!

The photo on the right is of geeky 27 year old Elon Musk. That Elon lacked a social life compared to his brother and sister. They went to parties while he spent most of his time doing solitary activities, like reading and programming. 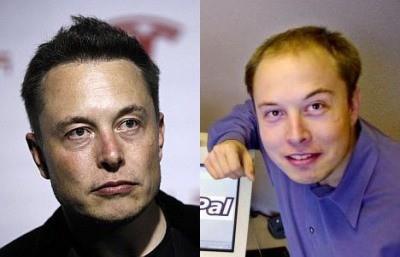 One of his college housemates said: “Elon was the most straight-laced dude you ever met. He never drank. He never did anything. Zero. Literally nothing.”

Elon himself said he worked 100 hours a week for more than 15 years.

The problem with success, as Stefano Zorzi explains:

“We invariably look up to people once they have made it. Not before, or in the process of doing so.“

“Successful people are typically well groomed, confident, charismatic — all carrying that aura of inevitability only hindsight can give.

People in the process of (trying to) become successful, on the contrary, are tired, overworked, underslept, insecure, worried about a million things and, frequently, certain that they are never going it make it.“

If YOU are feeling tired, overworked, underslept, insecure and certain that you are never going it make it— you can relax a little…

YOU ARE NOT ALONE!