“There’s a point, around the age of 20, when you have to choose whether to be like everybody else the rest of your life, or to make a virtue of your peculiarities.” – Ursula K. Le Guin

I’ve been working with a small group of super talented high-performers in my new Mastermind program.

They include a PhD, an aerospace engineer currently selling her business for a billion dollars, a martial arts world-champion, a headhunter who walked away from a 7-figure salary, a leader in the non-profit world.

They are all entrepreneurs, leadership consultants and executive coaches.

During our last intensive, the most important distinction of the day was that in a world where almost everyone is talking of the importance of going wide your real competitive edge comes from going deep.

It means embracing your quirks because YOUR people have them too.

I’m constantly being told to scale my business.

I’m constantly bombarded with messages and adverts about how to reach ‘a million people’.

“You should make more money…”

When Steve and I first wrote The Prosperous Coach, lots of consultants, marketers and PR ‘experts’ advised us to broaden our audience to all business owners and not just coaches. (We ignored them!)

You’ve probably heard of Tim Ferriss and Zen Habits. They each have more than a million people on their email lists. And Maria Popova’s BrainPickings gets more than 5 million readers per month.

These numbers are seductive, right?

Who wouldn’t want a million readers?!

We live in a world of big, bigger, biggest.

We live in a world of MORE…

But it’s not the only way.

And it’s usually not the most fun way.

I’m not for everyone, I know that. I’m an acquired taste…

I write long emails. I know that’s not for everyone.

I run 4 day events where I coach rather than teach. I know that’s not for everyone.

Working with us requires a significant investment—of time, money and energy. I know that’s not for everyone.

I seek out high performers and elite coaches. That’s very consciously not for everyone.

I bring more and more of my strange, idiosyncratic, weird self out as time goes on…

On a PERSONAL level—I’m an introvert, who needs to recover his energy after being around lots of people.

I’m a sensitive person who can be overwhelmed by loud concerts, bars or restaurants.

I can get stressed if plans change at short notice. I love quiet and I can immerse myself in books for hours.

In BUSINESS—I’m more interested in building a community of leaders than a community of followers. (I love spending time with peers and I’m usually turned off by people who put me on a ‘pedestal’.)

I enjoy speaking my truth and challenging my clients, rather than ‘pleasing’ them or saying what they want to hear. I love it when a client says, “I hate you, Rich!”

We’ve built a business on the premise “Slow Down to Speed Up”. We don’t care about having fast email response times. We don’t even reply to every email we receive!

But if you ARE one of our people—every one of our team will do our best to go beyond the call of duty for you.

We’ve built a business on the premise that we’re NOT for everyone.

It’s hard when people don’t like me or my message, my stories, or what I do.

One negative Facebook comment or a critical email can have a massively and disproportionate negative Impact on me.

It’s hard at times, when I see others become more successful or well known than me. Being a best-kept secret, passed on mainly by world of mouth can actually be frustrating.

But I know in my heart that what we do isn’t for everyone.

And if we’re not for everyone, then our secret mission has to be to polarize people.

Our mission is to create ZEROS and TENS.

If we’re not a ten out of ten for each other, then we’re a zero. Let’s save time and move on!

And if we are a ten, let’s see how deeply down the rabbit hole we can dive together.

A TINY BUT PASSIONATE COMMUNITY

We’ve built a really successful business with a relatively tiny email list of around 4,000 people.

In the last year this has grown to about 8,000. But even this astonishes my friends who are internet marketers.

You see, in a world of wide, we’ve gone weird!

We have built a business with a tiny but passionate community of extraordinary high performers and those on their way.

My new Mastermind is a $25K program and 90% of the members said they were drawn to what we do because a friend had told them about me.

Even The Prosperous Coach—which has sold close to 50,000 copies and has been in the top 20 books on Coaching on Amazon for almost 5 years is passed on mainly by word of mouth. We do nothing to market it.

BELONGING vs FITTING IN

Our special guest at the Mastermind was Marianne Cantwell (thanks for the intro, Jennifer Gresham!)

Marriane is the author of book Free Range Humans. And her recent TED talk is called “The Hidden Power Of Not (Always) Fitting In”.

She talked to us about the importance of being ok living BETWEEN worlds. Or even creating your own world, rather than trying to ‘fit in’.

We often admire leaders, entrepreneurs and innovators for being rule-breakers, risk takers and mavericks. And we admire change makers for speaking truth to power.

But then we catch ourselves trying to follow the well-trodden path, looking for ways to fit in, not stand out and not rock the boat.

Our real job is to explore the ways we DON’T fit in.

And the funny thing is, the more you embrace not fitting in, the sooner all the others who don’t fit in will find you!

“Fitting in is the greatest barrier to belonging. Fitting in, I’ve discovered during the past decade of research, is assessing situations and groups of people, then twisting yourself into a human pretzel in order to get them to let you hang out with them.

I LOVE YOU, STINKY FACE

One of my favorite story books to read to my boys when they were smaller was called “I loved you, Stinky Face”. 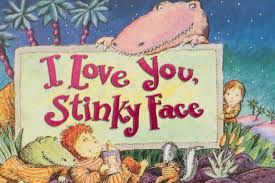 “But Mama,” asks a young child in the book, “would you still love me if I were a super smelly skunk, and… my name was Stinky Face?“

His mom replies that she would bathe him, “And if you still smelled bad, I wouldn’t mind, and I would whisper in your ear, ‘I love you, Stinky Face.”

In a world where everyone thinks they need to go wide, try going weird.

As Ursula Le Guin puts it: “make a virtue of your peculiarities.”

Be a stinky face. Find YOUR stinky face clients. And love the hell out of them!