Teo Alfero is the CEO & founder of Wolf Connection. He is also a founder member of my community of leaders called 4PC.

If you want to know what it means to live an exponential life, then Teo is a man you could learn from… 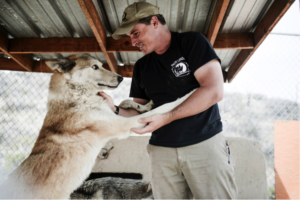 I DON’T HAVE ROOM IN MY LIFE FOR A WOLF!

8 years ago, Teo was a business owner. One day, he was offered a wolf-dog pup as a pet by a friend.

No thanks! he said. I’ve got no room in my life for a puppy, let alone a wolf pup.

But his friend had another dog which was hurting this baby wolf, so Teo reluctantly agreed to help after all.

Around that time, he began volunteering at an animal shelter in his spare time.

One day an old lady – who’d taken care of about a dozen wolves – passed away, and they were sent to the shelter.

But the shelter couldn’t cope and the animals were going to be put down.

And Teo found himself in the office of the shelter’s founder, saying, I’ll take care of them because I’ve always wanted to run a wolf sanctuary…

Except. That wasn’t true!

He’d never even dreamed of running a wolf sanctuary! The idea had not even once crossed his mind.

He just knew he had to help.

So he rented a plot of land, took his courage and his humility in his hands and he asked for volunteers to assist him.

A couple of friends helped, someone offered some wire fence for cages. And Wolf Connection was born.

Wolf Connection is now a sanctuary – a safe haven – for around 30 wolves and Wolf dogs, many of whom have been badly abused by their owners.

Teo is the creator and founder of Wolf-Therapy and his wolves help thousands of at-risk teenagers.

Dozens of volunteers give up their time to take care of these beautiful animals. And hundreds of people visit every year and hike with them in nature.

Teo has raised millions of dollars for Wolf Connection and gained the trust and backing of many celebrities.

WILL YOU GIVE ME A MILLION DOLLARS?

Two years ago, Teo was a participant at one of my Intensives, when I challenged everyone to go out and make some money over a break.

The secret, I told them was to FAIL and to collect as many NOs as they could. (That’s often a key to success, by the way!) 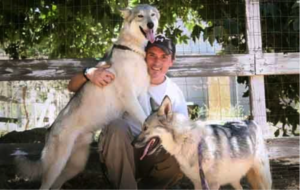 I HATE YOU, RICH

Eighteen months later, Teo stood on stage at another one of my Intensives to tell us a story.

You see, that day of the challenge, he’d left the room, thinking that he’d just ignore me!

He later told me he was angry with the challenge and hated me for setting it.

With an hour to go before the participants were due to return, he’d decided he’d just pretend that he’d done it.

With 30 mins to go before the participants were due to return, he decided, What the heck?! What have I got to lose?

He was trying to raise funds for Wolf Connection, so he picked up his phone.

Two gave him an immediate and visceral NO!

The third, he left a voicemail and they never ever returned his call.

But, as he stood on stage, 18 months since the terror of that exercise and those HELL NO phone calls, he told us that he’d now raised $3,000,000 for Wolf Connection.

He said two things happened for him on that day, when he’d collected his 3 NOs:

I’ve been in a Men’s Group with Teo for close to eight years.

We’ve been doing deep work together constantly throughout that time.

We’ve been side by side through deaths, marriages and births, through the successes and the struggles of business and the highs and the lows of life.

One of these photos is of Jean-Louis Rodrigue working with Teo at our recent 4PC Intensive on applying physicality to acting and performance.

Jean-Louis is the acting coach to many A-List celebrities, including Leonardo DiCaprio, Sir Ian McKellen, Forest Whitaker, Juliette Binoche and even the FBI!

We never stop learning or challenging one another. 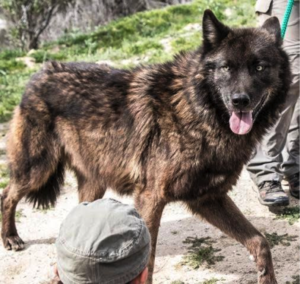 If you think what Teo has created in the past 8 years is incredible, watch this space.

This man is relentless.

His dream next year will always be bigger than his dream the year before.

His vision is to grow Wolf Connection ten times.

To create a foundation that is self-sustaining, that generates millions of dollars a year to work with thousands more at-risk teens and help many, many more wolves.

I am so proud and honored to call Teo a friend.

You can learn more about Wolf Connection, visit and even sponsor a wolf here:

P.S.  Learn more about the other members of our 4PC Community and how we never stop learning or challenging one another: www.4PC.Expert