I have written every day for the past 10 years. If you like to read, I've got your back - and I promise to challenge your thinking
Back to articles
November 25, 2017 • Be You

Super Soul Sunday is a TV show that features conversations between Oprah and philosophers, authors, visionaries and spiritual leaders.

And I recently met a man who was one of Oprah’s guests on the show.

Tim Storey grew up in inner city LA, the youngest of five children. His father died when he was 10 and his sister died in a car accident when he was 13.

These days he’s a speaker and also a coach to clients such as Robert Downey Jr., Kanye West, Natalie Cole, Lee Lacocca, and Quincy Jones.

Tim was speaking on stage a few years ago, when he noticed that a woman in the front row on her phone. It was distracting because she kept texting while he was talking. Then, every so often she’d hold her phone up to video him as he was speaking, too.

It turned out that she was Gayle King. You know, Oprah’s best friend!

After the gig, Gayle King explained that she wanted him to be on Oprah’s show.

But he needed to make some changes first.

After she went through the list with him, he said, No thank you!

He wasn’t willing to make those changes.

And he never did get to be on the show at that time.

Now a few years later, Oprah’s people got in touch again and it’s history. Tim and Oprah sat down and recorded a fascinating conversation on Super Soul Sunday that got rave reviews. 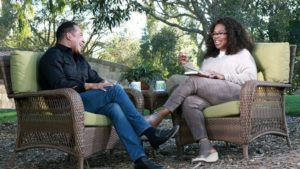 When they sat down to talk, Oprah said to him, “Back when we first reached out to you Tim, you weren’t ready. Now you’re ready.”

I really admire Tim for not being willing to compromise on who he is—even for an opportunity to be on TV with Oprah.

But what I told him that I appreciated most about his story was the words “you weren’t ready”.

And “YOU’RE NOT READY” gives me permission to breathe. And to slow down.

And that changes everything for me.